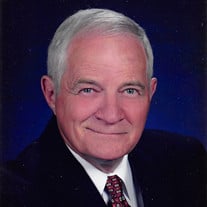 Mr. A.C. Hill, 78, of Navasota, passed away Sunday, May 13th at his home. Visitation with family and friends will be held from 5:00 - 7:00pm, Thursday, May 17th at Nobles Funeral Chapel. A celebration of his life will begin at 10:00am, Friday, May 18th, also at the funeral home. Rev. Jeremy Woodley will officiate. Interment will follow at Oakland Cemetery. Arrangements are under the direction of Nobles Funeral Chapel. A. C. was born October 24, 1939 in San Antonio, Texas to Arthur C. and Bertha (Wittenberg) Hill. He graduated from Giddings High School in 1957, he was a member of the Fightin’ Texas Aggie Class of ’61 and was in Squadron 4 of the Texas A&M Corps of Cadets. A. C. was an engineer and a mechanical genuis, holding numerous patents. In April of 1964, A. C. married the love of his life, Linda Ellard. Those that were fortunate to have met him always came away with a bit of knowledge or a humorous story that he shared with them. His children and grandchildren benefitted most from his vast knowledge and his uncanny ability to deliver this wisdom in a fascinating, oftentimes witty lesson. He instilled in them that same thirst for knowledge and an inquisitiveness and curiosity to know more and seek more. A. C. was a world traveller and spent a lot of time at sea on different research vessels. He loved the ocean and enjoyed every opportunity to be near it. He was fearless and never afraid of a challenge. Although his accomplishments in life and career were many, he was most proud of his family. A. C. enjoyed hunting, building things, watching Aggie football and spending time with his grandchildren. He was a member of the First United Methodist Church of Navasota and a past member of the Navasota School Board. Left to continue his legacy is his beloved wife of 54 years, Linda Hill; daughters Angie Hill Price and husband John of Navasota and Melissa McIntyre and husband Macky of Bellville; sisters Evelyn Knox of Giddings, Betty Ferrier of Little Elm; and Bertha “Bert” Bohannon, also of Little Elm, and grandchildren John Hill Price, Elizabeth Price, Jake McIntyre and Connor McIntyre. Serving as pallbearers are John Price, James Macky McIntyre, John Hill Price, Elizabeth Price, Jake McIntyre and Connor McIntyre. He was preceded in death by his parents, Arthur and Bertha Hill. In lieu of flowers, memorial contributions in his memory may be made to the Parkinson’s Foundation at www.parkinson.org; First United Methodist Church, 616 Holland Street, Navasota, TX 77868 or The Manufacturing Excellence Fund at www.txamfoundation.com. You are invited to leave kind words and fond memories at www.noblesfuneral.com.

Mr. A.C. Hill, 78, of Navasota, passed away Sunday, May 13th at his home. Visitation with family and friends will be held from 5:00 - 7:00pm, Thursday, May 17th at Nobles Funeral Chapel. A celebration of his life will begin at 10:00am, Friday,... View Obituary & Service Information

The family of Mr. A.C. Hill created this Life Tributes page to make it easy to share your memories.

Send flowers to the Hill family.