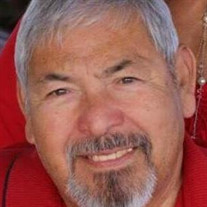 Mr. Agapito “Pete” Zaragoza, 72, of Hempstead passed away Sunday, February 7th at Tomball Regional Hospital. Visitation with family and friends will be held on Wednesday, February 10th from 5:00 – 8:00pm at Nobles Funeral Chapel. A memorial service to celebrate his life is scheduled for Thursday, February 11th at 2:00pm at Faith Outreach Christian Center in Navasota. Rev. Henry Sanders will officiate. Arrangements are under the direction of Nobles Funeral Chapel. Pete was born at Allen Farm outside of Navasota on November 2, 1943 to Francisco and Margarita (Villasana) Zaragoza, Sr. While he was still young, the family moved near Huntsville, Texas where he attended school. Pete worked at a multitude of trades in order to support his family until he was trained as a machinist – a career that would span over 34 years with Ram Forge Steel in Navasota. He married Mary Zaragoza at Trinity Lutheran Church in Hempstead on May 6, 2000. They lived life to the fullest going dancing, browsing flea markets and just enjoying their families. He was a member of the Grimes County Jaycees and played Santa Claus each year for the children; enjoyed a good game of golf; loved working on old care, camping and the outdoors. He played the accordion and sang as well. Pete was almost world famous for his barbeque talents, his practical jokes and his undying devotion to his beloved Houston Texans. He will be remembered most for his laugh and his love of life. He is survived by his wife, Mary Zaragoza of Hempstead; daughters and son-in-law Angie and Ricky Patrick of Huntsville and Kathy Zaragoza of Bryan; sons and daughters-in-law Alex and Anna Zaragoza of Navasota, David Zaragoza of Navasota and Matthew and Christine Zaragoza of Oklahoma; sisters and brother-in-law Paula and Raymond Acosta and Juanita McGilberry of Navasota; brothers and sisters-in-law Philip and Laura Zaragoza of The Woodlands, Ernest Zaragoza and Yolanda of Navasota; Frank Zaragoza and Frances of Navasota; Robert Zaragoza and Josie Zaragoza, also of Navasota; grandchildren Kristy, Jennifer, Diana Rae, Danielle, A. J., Brianna, Cade, Rebekah, Seth, Dylan, Mariah, Ashley, Kaileigh and Kayla; and four great grandchildren Owyn, Karlie, Desiree, Timothy Jr., and Cayden. He was preceded in death by his parents; daughters Connie, Jennifer and Yvonne Zaragoza; brothers Henry and Marion Zaragoza, and brother-in-law Fred McGilberry. The family suggests that in lieu of flowers, friends consider a memorial contribution to Faith Outreach Christian Center.

The family of Mr. Agapito "Pete" Zaragoza created this Life Tributes page to make it easy to share your memories.

Send flowers to the Zaragoza family.