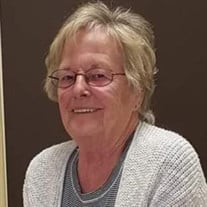 Alice “Faye” Cruse of College Station, TX passed away suddenly April 20th, 2022 at her home, Age 76. A celebration of Faye’s life with family and friends will take place at 1:00 p.m. Saturday, April 30th at Nobles Funeral Chapel in Navasota. Interment will be in the family cemetery at Circle C Ranch in Muse, Oklahoma at a later date. Arrangements are under the direction of Nobles Funeral Chapel. Faye, as she preferred to be called, was born in Baltimore MD, October 30th, 1945 to the late O. Berniece (Everman) and Marvin V. Shepherd and moved to Gaylord, MI in 1949. Faye was a 1963 graduate of Hemlock HS and 1993 graduate of Delta College School of Nursing-Saginaw Valley State University. She married Larry E. Cruse in Flint, MI on January 16th, 1965. The young family moved from Saginaw MI, to College Station TX in 1976. Although Faye had many jobs and careers over her life, she most recently retired from nursing at St. Joseph Hospital in Bryan after a 21 year career in nursing. Despite her retirement, Faye never stopped taking care of others and was always ready to step up and lend a hand, a heart, or a shoulder to cry on. She was always active whether it was a bowling league, dancing at the Hall of Fame, baking bread and Christmas cookies, softball tournaments, cub scout den leader, coaching her kids sports teams, or most recently domino tournaments. Faye is survived by her children Candace (Rick) Prater and Matthew (Celena) Cruse; grandchildren Lindsey (Luke), Brittanny (Tyler), Caitlyn, Michael, Nicholas & Patrick; great-grandchildren London, Liam, & Leah; former spouse Larry Cruse; brother Ron Shepherd and sister Gail Kwapis. She was preceded in death by her parents; stepfather, Eugene Young; brother Jack Shepherd; sisters Jane Raymond, Estella Hudeck, & Marlene Wade; and son Eric Cruse. You are invited to leave kind words and fond memories at www.noblesfuneral.com.

The family of Alice Faye Cruse created this Life Tributes page to make it easy to share your memories.

Send flowers to the Cruse family.