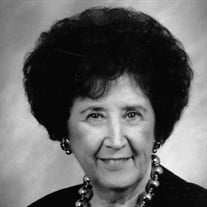 Mrs. Aminuan Saylors Webb, 90 of Navasota, passed away on Saturday, July 24, 2021. Visitation with family and friends will be held from 9:00 - 11:00 am, Thursday, July 29th at First Baptist Church of Navasota followed by a celebration of her life at 11:00 am. Interment will follow in Oakland Cemetery. Rev. Clyde Larrabee will officiate. Arrangements are under the direction of Nobles Funeral Chapel. Aminuan was born July 8, 1931 in Brownsboro, Texas, the daughter of Floyd Daniel Saylors and Beulah Lawler Saylors. Aminuan was the baby of the family, the youngest of four children. She was preceded in death by her parents and sisters Arlis Saylors Hart, Chloe Saylors Tompkins and brother Floyd (Blue) Saylors, Jr. Aminuan graduated from Brownsboro High School and Tyler Junior College. It was during her college years that she was introduced, by her brother Blue, to his friend and roommate at Sam Houston University, John C. Webb. Aminuan and John were married June 24, 1950 and she moved with her new husband to Navasota, Texas and began her life as Aminuan Webb, fun loving and full of life. Following her move to Navasota, Aminuan was at once active in all school activities, supporting her husband John C. Webb as football coach, principal, and later superintendent of schools. She also worked as bookkeeper for Grimes County Tax Office, the Navasota A.S.C. office and later Mid-South Electric Coop, from which she retired in 1987 after 27 years of service. Aminuan was also active in the Navasota Garden Club, the Music Study Club, and the Grimes County Heritage Association. She will be remembered for her work in the Navasota First Baptist Church, where she served as a choir member for over 50 years. She served as a Sunday School teacher, Class President, Vacation Bible School teacher, Homebound Visitor, and on numerous other church committees. Aminuan will especially be remembered for her fun, entertaining personality whether playing bridge, hosting frequent dinner parties, or traveling the world. Aminuan is survived by her daughter and son-in-law Cynthia Ann and James C Winton of Houston, Texas; son and daughter-in-law John C. Webb Jr. and Sue Pool Webb, of College Station, Texas; seven grandchildren, Christopher Brooks and wife Molly of Pinehurst, Texas, Matt Winton and wife Mandy of Midlothian, Virginia, Chris Winton and wife Genevieve of League City, Texas, Webb Brooks and wife Jessica of Kansas City, Missouri, Sue Ellen von Merz and husband Carl of Houston, Texas, Hallie Mancuso and husband Cory of Georgetown, Texas, Ashlyn Hand and husband Mark of Durham, North Carolina; twenty great-grandchildren; one great-great grandchild and numerous nieces, nephews, and lifelong friends. For those wishing to donate in Aminuan’s memory, memorial contributions may be made in her name to the First Baptist Church of Navasota, 301 Church Street, Navasota, TX 77868. You are invited to leave kind words and fond memories at www.noblesfuneral.com.

Mrs. Aminuan Saylors Webb, 90 of Navasota, passed away on Saturday, July 24, 2021. Visitation with family and friends will be held from 9:00 - 11:00 am, Thursday, July 29th at First Baptist Church of Navasota followed by a celebration of her... View Obituary & Service Information

The family of Mrs. Aminuan Saylors Webb created this Life Tributes page to make it easy to share your memories.

Mrs. Aminuan Saylors Webb, 90 of Navasota, passed away on Saturday,...