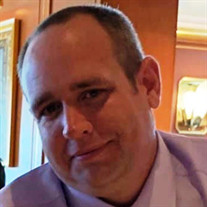 Andrew Ray Gerke, 40, of Navasota, Texas went to his Lord and Savior on Friday, October 18, 2019 after a tragic automobile accident. A memorial service celebrating his life will be held Tuesday, October 22nd, at 2:00PM at Nobles Funeral Chapel with the Rev. Richard Mayerhoff officiating. Arrangements are under the direction of Nobles Funeral Chapel. He was born in Lampasas, Texas on March 29, 1979 to Billy Ray and Beverly Gerke. Andrew graduated from Navasota High School in May of 1997. On July 20, 2018, he married Haley Gutierrez. Andrew was excited and blessed to become a dad to Hattie. Andrew most recently worked for Halliburton in west Texas, New Mexico, Oklahoma and North Dakota. Prior to working for Halliburton, he worked for Kimbrell Farms, Itasca ISD, Walmart Distributing Center and JW Paving. Andrew enjoyed working with heavy equipment and driving semi-trucks. He loved the outdoors. Andrew did not miss an opening day of deer season if at all possible. Just preparing for deer hunting was a sport within its self. He enjoyed fishing even when he did not catch anything. Andrew was preceded in death by his paternal grandparents, Julius and Malinda Gerke and maternal grandfather, Richard Donald Murphree. He is survived by his wife, Haley and step-daughter Hattie of Navasota. He also leaves behind his parents, Billy Ray and Beverly Gerke of Itasca, Texas. His sister, Sherry and husband, Harley Davis of Itasca, Texas. One brother, Jonathan Gerke and wife Carla of Albert Lea, Minnesota. Two nephews, Nolan and Joseph Davis of Itasca, Texas. One step-son, Lane Warrick. Father and mother-in-law, Gus and Sandy Gutierrez , of Navasota, Texas. Sister and brother-in-law Keley and Joe Barrientos of Navasota, Sister and brother-in-law Lacey and James Garcia of Navasota, as well as a host of beloved aunts, uncles, and cousins. In lieu of flowers, the family would ask that a memorial contribution be made in Andrews memory to CASA of Hill County Texas, 200 East Franklin Street, Hillsboro, Texas 76645 or the City of Navasota Animal Shelter, 200 E. McAlpine, Navasota, Texas 77868. You are invited to leave kind words and fond memories at www.noblesfuneral.com.

Andrew Ray Gerke, 40, of Navasota, Texas went to his Lord and Savior on Friday, October 18, 2019 after a tragic automobile accident. A memorial service celebrating his life will be held Tuesday, October 22nd, at 2:00PM at Nobles Funeral Chapel... View Obituary & Service Information

The family of Mr. Andrew Ray Gerke created this Life Tributes page to make it easy to share your memories.

Andrew Ray Gerke, 40, of Navasota, Texas went to his Lord and...

Send flowers to the Gerke family.