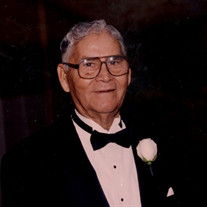 Augustin Hernandez Reyes, a lifetime resident of Washington County, passed away on December 14, 2015 at his home. Visitation will be held at Nobles Funeral Chapel from 5:000 – 8:00pm on Thursday, December 17th with a rosary being recited at 7:00pm. A Funeral Mass celebration will be held at 9:30 am, Friday, December 18th at Christ Our Light Catholic Church in Navasota with the Rite of Committal immediately following in Oakland Cemetery in Navasota. Arrangements are under the direction of Nobles Funeral Chapel. Mr. Reyes, 97, was born in Burton, Texas and raised his family in Houston, returning to live in Washington in 1976. He was the son of Miguel Reyes and Refugia (Cuca) Hernandez Reyes, from San Cristobal, San Luis Potosi, Mexico and Laredo, Texas respectively. Don Miguel and Dona Refugia moved to Burton in 1908 to become sharecroppers for Burton land owner Neinast. Mr. Reyes began working with the Southern Pacific Railroad Company in the 40’s and retired from the same railroad company. Upon retirement, Mr. Reyes returned to Washington County. H never attended public schools, but became a very self-educated man. He was active in his church, Christ Our Light Catholic Church in Navasota, Texas. He was an avid lifetime baseball player, coach and fan. His passions were in Spanish television, baseball games, colorful cowboy shirts, bolo ties and going to the livestock auction. When he was not chasing down animals on his farm, he was glued to a baseball game and the telenovelas. He is survived by five daughters and five sons and their spouses, as follows: Frank and Virginia Reyes, Tony G. and Alicia Reyes, Augustina H. Reyes and Michael A. Olivas, Ben T. and Rosalie Reyes, Lillie Aranda, Johnny and Mariette Reyes, Mary Reyes, Caroline and Michael Lopez, Gregg and Rebecca Reyes, Mitchell and Kent Webster; siblings Basilio Reyes; Nicolasa Villegas and Dolores Barrera and over 60 grandchildren, great-grandchildren and great-great grandchildren, nieces and nephews. He was preceded in death by his wife of 54 years, Jane Torres Reyes, brothers and sisters (and their spouses) Lucinda Reyes Orozco of Somerville, Jesus and Mercedes Reyes of Navasota, Casimiro and Amalia Reyes, Dora Reyes, Juan and Torivia Gongora of Houston, Lucia and Pablo Martinez of Caldwell, Macedonio Reyes of Saginaw, Michigan, and Epifanio Reyes of Sugarland. You are invited to leave kind words and fond memories at www.noblesfuneral.com.

Augustin Hernandez Reyes, a lifetime resident of Washington County, passed away on December 14, 2015 at his home. Visitation will be held at Nobles Funeral Chapel from 5:000 &#8211; 8:00pm on Thursday, December 17th with a rosary being recited... View Obituary & Service Information

The family of Mr. Augustin H. Reyes created this Life Tributes page to make it easy to share your memories.

Send flowers to the Reyes family.