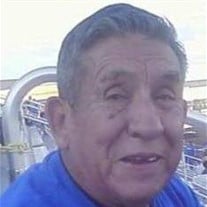 Augustine Carrio Ybarra, 85 of Navasota, went to be with our Lord and Savior on Monday, August 14, 2017 at CHI St. Joseph Hospital in Bryan, Texas. Visitation with family and friends will be held from 5:00pm – 7:00pm, Friday, August 18th at Nobles Funeral Chapel. A rosary will follow the visitation at 7:00pm. A celebration of his life will be held at 11:00am Saturday, August 19th, also at the funeral home. Interment will follow in Oakland Cemetery. Rev. Lupe Ybarra, along with his brother Jessie Ybarra, will officiate. Arrangements are under the direction of Nobles Funeral Chapel. Augustine was born October 9, 1931 in New Braunfels, Texas to Josephine Carillo and Pete Ybarra, Sr. He was a life-long resident of Navasota and the proud and loving father to 15 children. His hobbies included spending time with his children, whether it was watching/coaching them at a sporting event, doing yard work or just spending quality time with them at his home. He had other hobbies as well, one of his favorites was spending time with his brothers and sisters. He also enjoyed coaching his semi-pro baseball team, watching and supporting his favorite football teams, the Navasota Rattlers and the Dallas Cowboys, along with travelling. Mr. Ybarra was a very successful mechanic by trade as well as a respected entrepreneur. Augustine is survived by his children, sons and daughter-in-law Pastor Lupe and Cindy Ybarra, Tommy Ybarra and Chris Ybarra, all of Navasota, Jessie Ybarra of Houston and Joe Ybarra of Canton, Ohio; daughters and sons-in-law Janie and Shanan Outland of Deanville, Rosemary and Michael Harper, Linda and Michael Surface and Renee Ybarra, all of Navasota, Sally and Robert Hosea of Huntsville, Susie and Michael Brooks of Washington, Betty and Chris Sapaugh of Sulphur Springs, Lisa and Charles Cooke of College Station and Beverly and Rodney Tyler of Waco; brothers Frank Ybarra of Houston and Pete Ybarra, Jr. of Benchley; sisters and brothers-in-law Frances and Tommy Bellow of Bridge City and Helen and Nicolas Quezada of Bryan, Josie Urbano and Mary Jane Ybarra, also of Bryan, and Lucille Chavarria of Navasota; and brother-in-law Valeriano and wife Tomasa Melchor of Navasota. He was also the proud Grandpa (PawPaw) to 44 grandchildren and 42 great-grandchildren, as well as numerous nieces, nephews, cousins and friends. Serving as pallbearers are Ty Ybarra, Matthew Ybarra, Allen Ybarra, Joshua Ybarra, Lucas Sapaugh, Chris Sapaugh, Charles Cooke, Larry Cantu, Saul Thornton and Martin O’Laughlin. He was preceded in death by his parents; wife Rafaela M. Ybarra; son Martin “Mark” Ybarra; brothers Mike Ybarra, Sr. and Johnny Ybarra and great-granddaughter Alexia Surdukan. In lieu of flowers, please consider a memorial contribution in his memory to the Alzheimers Association, Houston & Southeast Texas Chapter, 2242 W. Holcombe Blvd, Houston, TX 7030-2008. You are invited to leave kind words and fond memories at www.noblesfuneral.com.

Augustine Carrio Ybarra, 85 of Navasota, went to be with our Lord and Savior on Monday, August 14, 2017 at CHI St. Joseph Hospital in Bryan, Texas. Visitation with family and friends will be held from 5:00pm &#8211; 7:00pm, Friday, August 18th... View Obituary & Service Information

The family of Mr. Augustine C. Ybarra created this Life Tributes page to make it easy to share your memories.

Augustine Carrio Ybarra, 85 of Navasota, went to be with our...