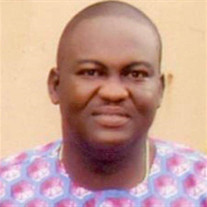 Mr. Ayotunde "Ayo" Latif Oyesonwen, 42 of Katy, Texas passed away Wednesday, November 13th at CHI Grimes St. Joseph Hospital in Navasota. Visitation with family and friends will be held from 1:00 pm - 8:00 pm, Thursday, November 21st at Nobles Funeral Chapel. A celebration of his life will begin at 10:00am, Friday, November 22nd, also at the funeral home. Interment will follow in Oakland Cemetery. Ayotunde “Ayo” Latif Oyesonwen, was born on November 18, 1976 in Lagos, Nigeria to Alhaji M. Adewale and Taiwo Oyesonwen. He was the first son of his family and was fondly known as “Ayo” by his family and friends. He started his early education at St. Joseph's Catholic Primary School, Surulere, Lagos from 1982 to 1989. After which he attended Birch Freeman High School, Surulere, Lagos from 1989 to 1995. During his senior year in high school, he served as the Senior Prefect (Head Boy) for the school in 1995. He also represented the school in various science competitions and won several laurels. Ayo went on to attend University of Ibadan, in Oyo State where he received his Bachelors degree in Agricultural Economics. While at the university of Ibadan, he served as an Executive Member of Nnamdi Azikiwe Hall and was also a member of the Student's Union body. He proceeded to obtain a Master’s degree in Business Administration (MBA) from the University of Lagos at Akoka in 2008. After which he went on further to complete and pass his professional certificate examinations qualifying him as a chartered accountant with ICAN (Institute of Chartered Accountants of Nigeria). He worked as a chartered accountant for over 4 years at various chartered accounting and stock broking firms before proceeding to United States of America (USA) in 2016 for greener pastures. He started his work as a Corrections Officer in May, 2017 with the Texas Department of Criminal Justice (TDCJ), Wallace Pack Unit in Navasota, Texas. Ayo gave his life to the Lord at a very young age of 6 years. He joined the Redeemed Christian Church of God (RCCG), Surulere, Lagos, where he was actively involved as one of the youth wing members. He attended RCCG Surulere for 10 years and served as a Sunday school teacher between 2005 and 2010. And most recently was a member of the RCCG, Kings Palace, Katy, Texas. He was a beloved son, father, brother, uncle and friend had a very kind and gentle soul and touched the lives of the many people he met during his life. He was very hard working and always had a big smile on his face regardless of whatever challenges he encountered. He was well loved by his family, friends, and co-workers. He will surely be missed by everyone that knew him. Ayo leaves behind his mother Mrs. Taiwo Oyesonwen; sisters and brothers in law Abimbola and Rotimi Abioro, Kemi and Moses Oladipo, Funmilayo and Samuel Olajide; brothers Owolabi Peters, Ibrahim Kareem; and many cherished aunts, uncles, nieces, nephews, cousins, and numerous extended family members. He was preceded in death by his father Alhaji M. Adewale Oyesonwen. You are invited to leave kind words and fond memories at www.noblesfuneral.com.

The family of Mr. Ayotunde "Ayo" Latif Oyesonwen created this Life Tributes page to make it easy to share your memories.

Send flowers to the Oyesonwen family.