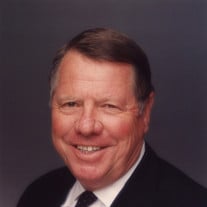 Pete Huddleston passed away peacefully Wednesday, July 31, 2019, at his cherished Double H Ranch in Navasota, Texas. He was born February 2, 1934, in Iraan, Texas. He is survived by his beloved wife of 62 years, Flora Mae (Flossie) Thompson Huddleston, his children Peter Huddleston, W. Paul Huddleston, and Lisa Currie, and their spouses Kathy, Dori, and Peter. He was also loved by his eight grandchildren, Mitchell, Jordan, Will, Emily, Katherine, Joseph, Claire, and Kate; 4 great-grandchildren, Grayson, Logan, William, and Aubrey; and his brother G.K. (Corky) Huddleston. He was preceded in death by his parents, Acie Ray and Jewel Charity Dukes Huddleston and his brother Kenneth Ray Huddleston. Pete was a member and captain of the famed Texas A&M Junction Boys football team of 1955. He went on to graduate from Texas A&M University in 1957, then served for 2 years in the United States Air Force and an additional 17 on active standby, reaching the rank of Captain. Beginning in 1959, he went to work with Marathon Oil Company, where he worked until 1965. In 1965, Pete and his family moved to Houston to form Huddleston & Co., Inc., which grew into a respected worldwide petroleum engineering consulting firm which is currently headed by his son, Peter Huddleston. In 1967, he founded Peter Paul Petroleum Company, now known as Posse Resources, LLC, headed by his son-in-law, Peter Currie. Pete taught in the department of Petroleum Engineering at Texas A&M University from 1981 through 1998 as a visiting professor. Throughout his career, Mr. Huddleston has been recognized for many achievements, including the Texas A&M Petroleum Engineering Academy of Distinguished Graduates, the Texas A&M College of Engineering Outstanding Alumni Award, the Texas A&M University Distinguished Alumnus Award, the Texas A&M Corps of Cadets Hall of Honor, the Texas A&M Letterman’s Lifetime Achievement Award, the Society of Petroleum Engineers Economic and Evaluation Award, and the AIME Economics Award. In addition to his professional achievements, Pete truly enjoyed raising cattle and exotic animals and gardening on his Double H Ranch. A pet project, in association with his longtime ranch manager and close friend, Glenn Wilson, was a breeding program to create a new cattle breed. His breeding project remains a work in progress. All of Pete’s family and friends will especially recall his infectious storytelling which drew in friends and strangers equally, no matter whether around a campfire or in a boardroom. His experiences ranged from growing up in West Texas, working in the oil field, playing sports, to his career in the oil and gas industry. No matter the subject at hand, he was able to regale his audience with an anecdote to add color to the conversation. Of course, those closest to him may have heard his version of events a number of times. Pete and Flossie have focused on philanthropy supporting many causes, including Texas A&M University, the Houston Museum of Natural Science, and Chapelwood United Methodist Church. They have supported hundreds of individual students with scholarships to further their higher education. Mr. Huddleston will be sincerely missed by his wife, his family, his many former employees and former students. A memorial service celebrating his life will be held at 1:00 pm, Friday, August 16th at Chapelwood United Methodist Church in Houston. In lieu of flowers please make donations to Texas A&M University or the charity of your choice.

Pete Huddleston passed away peacefully Wednesday, July 31, 2019, at his cherished Double H Ranch in Navasota, Texas. He was born February 2, 1934, in Iraan, Texas. He is survived by his beloved wife of 62 years, Flora Mae (Flossie) Thompson... View Obituary & Service Information

The family of Mr. B. P. "Pete" Huddleston created this Life Tributes page to make it easy to share your memories.

Send flowers to the Huddleston family.