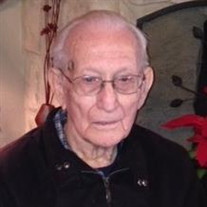 Thomas “Benton” Dedmon, Sr., age 97, of Navasota, Texas passed away peacefully on Saturday, July 21, 2018 at Navasota Nursing & Rehabilitation. Services will be held on Tuesday, July 24, 2018, at Nobles Funeral Chapel in Navasota conducted by a longtime friend, Mr. Hollis Hood. Visitation with the family will begin at 9 am with a service to follow at 11 am. Interment will immediately follow the service at Oakland Cemetery in Navasota. Arrangements are under the direction of Nobles Funeral Chapel. Benton was born May 20, 1921 in Plantersville, Texas; the only child of Walter Norwood and Loretta Jo (McGinty) Dedmon. He served in the Army from 1942-1946 where he was a mechanic during World War II. He was stationed in England and Germany. On July 3, 1946, at the age of 25, Benton married Lessie Rene Boggan in Hearne, Texas and they remained married for over 70 years until Lessie Rene’s passing in February of last year. The couple lived in Navasota their entire marriage and had two children, Bennie Renea (Dedmon) Nobles and Thomas Benton “Tommie” Dedmon, Jr. Benton and Lessie Rene joined First Baptist Church of Navasota in March of 1953 where they were very involved for many years. It was never a question where they would be on Sunday morning. They set an excellent example for their children and grandchildren. Benton was a banker at First National Bank of Navasota until he retired in 1987. In his spare time, he stayed busy with his many hobbies. He loved to fish, was the best gardener you ever knew and had a passion for building things. Benton was either at “The Place” tending to the garden or in his garage working. Anything he saw that interested him, he would figure out what he needed and build it to perfection. Benton (aka Granddaddy) was the perfect definition of unconditional love. His desire to help others, the patience he exhibited and the love and encouragement he displayed to people cannot be matched. The dedication he demonstrated to Lessie Rene during her battle with Alzheimer’s was unwavering – spending every day at her side. He will be dearly missed by his family and everyone that knew him. Benton is preceded in death by his father and his mother (who lived to the age of 107); his wife Lessie Rene; and his son Tommie. He is survived by his daughter Bennie Renea (Dedmon) and husband Marcus Nobles of Deer Park, Texas; three grandchildren Philip Pratt, Jr. and wife Tammi of Navasota, Cassie (Pratt) Pullig and husband Scott of Deer Park, and Trista Dedmon of Seattle, Washington; and four great-grandchildren, Brandon Pullig, Dylan Pullig, William Pratt and Dillon Schulz. He is also survived by many nieces and nephews. Serving as pallbearers are Scott Pullig, Dylan Pullig, Dillon Schulz, Bobby Boggan, Charlie Boggan and Bob Branderhorst and honorary pallbearer Brandon Pullig. The family would like to express their sincere gratitude to the wonderful nurses, aides and staff at Navasota Nursing and the nurses at Encompass Hospice for the loving and compassionate care shown to him. You are invited to leave kind words and fond memories at www.noblesfuneral.com.

The family of Mr. Benton Dedmon created this Life Tributes page to make it easy to share your memories.

Send flowers to the Dedmon family.