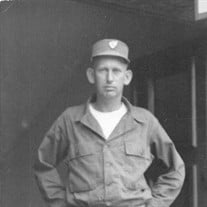 Bernhard “Bennie” Henry Wellmann, age 89 of Washington, Texas died Monday, October 9th at CHI St. Joseph Health Grimes Hospital in Navasota. Visitation with family and friends will be held on Wednesday, October 11, 2017 from 5:00 to 7: 00 pm at Nobles Funeral Chapel in Navasota, Texas. A celebration of his life will be held at 2:00 pm, Thursday, October 12, 2017 at Friedens Church of Washington with Dr. George Klett officiating. Interment will follow in the church cemetery. Arrangements are under the direction of Nobles Funeral Chapel. Mr. Wellmann was born January 22, 1928 in Washington, Texas the son of Fritz and Elnora Buck Wellmann, Sr. He was baptized and confirmed in the Friedens Church of Washington and attended the Washington Grade School. He served in the U.S. Army in Bamburg, Germany. Bennie was a dairy farmer and spent his entire life on the family farm in Washington. He was a member of Friedens Church of Washington and also a member of the Sons of Hermann. He is survived by his sisters and brother-in-law Leona Lunsford of Navasota, Mildred Schroeder of Anderson and Minette and John Grice of Navasota, along with nieces and nephews. Mr. Wellmann was preceded in death by his parents; brother and sisters-in law, Fritz William Wellmann, Jr. and wife Lillian, Melvin Wellman and wife Dorothy Marie, and brothers-in-law, Billy Lunsford and Albert Schroeder. In lieu of flowers, memorial contributions may be made in his memory to Friedens Church of Washington, 20301 FM 1155, Washington, Texas 77880 or the Washington Volunteer Fire Department, 20304 FM 1155, Washington, Texas 77880. You are invited to leave kind words and fond memories at www.noblesfuneral.com.

The family of Mr. Bernhard "Bennie" Wellmann created this Life Tributes page to make it easy to share your memories.