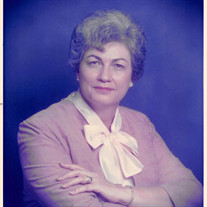 Mrs. Betty Sue Ketchum, 85, of Navasota, passed away peacefully at her home Friday, September 3, 2021, surrounded by her loving family. Visitation with family and friends will be held Wednesday, September 8, 2021 from 8:00-9:30 am at Nobles Funeral Chapel. Graveside services will follow at 10:00 am in Oakland Cemetery with Pastor Clyde Larrabee officiating. Arrangements are under the direction of Nobles Funeral Chapel. Betty was born to Roy Arnum and Sarah Carolyn (Tabor) Brown in Clifton, Texas, on November 13, 1935. Her family moved to Navasota in 1948. She met her husband Charlie, when they worked together at Elliott’s Drug Store. They were married on August 17, 1968 with a small wedding at the home of his parents, Dr. E. T. and Mrs. Helen Ketchum. They later bought the drug store and worked alongside each other, eventually changing the name to Ketchum’s Pharmacy. Betty loved to cook. She demonstrated her love for family and friends by cooking or baking their favorites. She hated when she had to give it up. She was a member of First Baptist Church of Navasota, where she had served as a Sunday School secretary. She also served on the Funeral Benevolence, where she continued her desire to show her love for others by providing a meal. She was preceded in death by her husband Charles A. Ketchum; parents Roy A. and S. Carolyn (Tabor) Brown; sisters and brothers-in-law, Barbara Ann and Edward Borgman, Glynda June and Malcolm Meekins, and Diana Kay Brown. Mrs. Ketchum is survived by her Son Thomas Ketchum and Christie Barnard of Rhone; daughters and sons-in-law, Kate and Stephen Miller of Navasota, Carolyn and Michael Prescott of Navasota, and Karen and Randy Prince of Leander; brother and sister-in-law Kenneth and Reba Lou Brown of Montgomery; grandchildren Shane Prescott, Celeste and Tom Peters, Paige and Justin Power, Travis and Lindsay Sterling, Morgan Prince, Matthew Miller, Marshall Miller; four great-grandchildren and two future great-grandchildren. Serving as honorary pallbearers are Stephen Miller, Michael Prescott, Randy Prince, Shane Prescott, Travis Sterling, Matthew Miller, and Marshall Miller. For those that desire, memorial contributions may be made to First Baptist Church of Navasota or the American Cancer Society. The family wishes to thank the angels who helped care for their mother-Lucia Guitron, Callie Diffie, Carolyn Kolbasinski, and Trevina Rogers.

Mrs. Betty Sue Ketchum, 85, of Navasota, passed away peacefully at her home Friday, September 3, 2021, surrounded by her loving family. Visitation with family and friends will be held Wednesday, September 8, 2021 from 8:00-9:30 am at Nobles... View Obituary & Service Information

The family of Mrs. Betty Sue Ketchum created this Life Tributes page to make it easy to share your memories.

Send flowers to the Ketchum family.