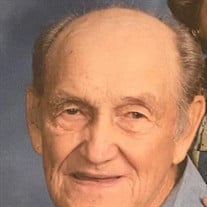 Billy ‘Papa’ Hyman, 87, of Plantersville, Texas passed away peacefully on December 17, 2021 surrounded by family. Visitation will be held Monday, December 20, from 6:00 - 7:00 PM at St. Joseph's Catholic Church followed by a parish rosary at 7:00 PM. A Funeral Mass will be celebrated Tuesday, December 21, at 10:30 AM at St. Joseph's Catholic Church with the Rev. Ed Kucera officiating. Rite of committal will follow in the church cemetery. Arrangements are under the direction of Nobles Funeral Chapel. Billy was born in Plantersville, Texas on November 21, 1934 to Billie and Mary Hyman. He graduated from Magnolia High School where he earned All District honors as a wide receiver on the Bulldog football team. Billy then entered the United States Army where he was stationed at Ft. Ord, California. After being honorably discharged, Billy met his wife of 63 years, Shirley, in Houston in 1957 and the two married on November 8, 1958. He was employed by South Main Bank and Consolidated City Music as a Manager while living in Houston until he retired in 1990. Billy and Shirley moved to Plantersville in 1991 and continued residing there on the land where he was born until his passing. He was an immense family man and enjoyed being with his children, grandchildren and great grandchildren. Billy also enjoyed snow skiing, decorating his property for Christmas and spending time outside on the farm. He was a member of St. Joseph’s Catholic Church in Stoneham, Texas. Billy was preceded in death by his son, Alan, in 1986 and his three brothers and three sisters. He is survived by his wife, Shirley, three daughters, Debbie and Rick Nordstrom of Cypress, Texas, Cathy and Mark Phillips of Conroe, Texas, Kim and Paul Crawford of Magnolia, Texas, his three grandchildren, Jennifer Kelley of Houston, Texas, Justin Phillips and wife Samantha of Magnolia, Texas and Amanda Cook and husband Jon of Magnolia, Texas as well as his two great grandchildren Olivia Grace and Austin Eli Cook, and numerous nephews and nieces. Pallbearers are Mark Phillips, Rick Nordstrom, Paul Crawford, Justin Phillips, Jon Cook and Leon Combs. Honorary pallbearers are Elvin Kutac and Tommy Wetuski. In remembrance of Billy, the family asks that any charitable donations be made in his name to the St. Joseph’s Catholic Church Altar Society or Remarkable Hospice in College Station, Texas. You are invited to leave kind words and fond memories at www.noblesfuneral.com.

The family of Mr. Billy M. Hyman created this Life Tributes page to make it easy to share your memories.

Send flowers to the Hyman family.