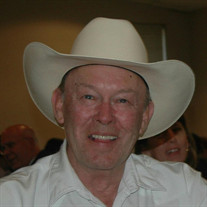 Bobby Dale McNew, 70 of Navasota, went to rest and joined his loving wife on October 4th 2020. A memorial service in celebration of his life will be held at 10:00 am, Saturday, October 10th at Nobles Funeral Chapel with the Rev. John Montgomery officiating. Born May 5th, 1950, in Big Spring, Texas, he was one of 10 children raised on the farm where they raised cotton, cattle, and hogs. He was the father of two sons, Thomas McNew and Michael McNew. He was also a proud grandfather to Brent McNew. He learned how to work hard for a living. He held various jobs from the Motorola Company in Chicago, Illinois, to a feed store in Texas. When he was just 16 years of age, he joined his older brothers, Rex and Billy in the seismic field. He was rapidly promoted to Junior Observer for Western Geophysical. During his time there, he decided that he didn’t much like working in the mud and mosquitoes so he quit and moved to Navasota where he met and married Georgia Faye Shine. His first real job in Navasota was working for Alfred Glassell, Jr. as a ranch manager and remained as the manager for over 35 years. During his time on the ranch he became a Grimes County Justice of the Peace for Precincts 3 & 4 where he presided over municipal court until his retirement. During all these years he made friends with the love of his life. Ranching for the both of them was hard. It was something straight out of the movies… a girl from the city meets the boy from the farm. The work hours were long and there was little time to spare, but Bobby was always willing to lend a hand in the community. He served his community as Justice of the Peace with honor and integrity during his capacity. This was so fulfilling to him; the satisfaction and reward was overwhelming. To this day people in the community always call him Judge Bobby or Judge McNew or just plain Judge. Retirement didn’t suit him, and he went back to work again with Western Geophysical and became Party Manager until their closure. Bobby then formed a landman company and held this until his passing. He was able to see the United States while working for a number of years until he decided to fully retire in 2017 and began to travel for leisure. He was a fun seeker in every which way imaginable - seeing several countries and U.S. destinations some of us have only seen in photos. His best friend was his grandson Brent and he would always place a bet that he knew he couldn’t win but would still place each time to see who caught the biggest fish - always losing. He had a trip planned to go skiing in Colorado just next week but that was cut short due to complications with his Aortic Aneurysm causing his death. Bobby was preceded in death by his loving wife Georgia Faye Shine McNew; parents R.X. McNew and Lillie Ruth McNew; brothers Billy McNew, James (Roy) McNew, and Rexie McNew and sister Jean Crowder. He is survived by his two sons and daughters-in-law, Thomas and Jennifer McNew of San Antonio and Michael McNew of Edinburg and his only grandson, Brent Michael McNew; sisters and brothers-in-law Joy & Robert Howland of Coahoma, Carolyn & Jimmy Rogers of Big Spring, Sharon & Bob Husson of Garland, Barbara and Danny Clark of Coahoma, and sister-in-law Patsy McNew of Athens as well as many other nieces, nephews, and loved family members and friends. You are invited to leave kind words and fond memories at www.noblesfuneral.com.

Bobby Dale McNew, 70 of Navasota, went to rest and joined his loving wife on October 4th 2020. A memorial service in celebration of his life will be held at 10:00 am, Saturday, October 10th at Nobles Funeral Chapel with the Rev. John Montgomery... View Obituary & Service Information

The family of Mr. Bobby McNew created this Life Tributes page to make it easy to share your memories.

Bobby Dale McNew, 70 of Navasota, went to rest and joined his...

Send flowers to the McNew family.