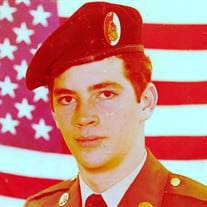 Bradley “Brad” Kenneth Hendricks, Sr., 61 of Richards passed away Friday, February 17th at his home. A graveside memorial service will be held at 1:15pm, Tuesday, March 7th at Houston National Cemetery in Houston, Texas. Brad was born July 26, 1955 in St. Louis, Missouri to Olan Kenneth Hendricks and Bernice (Cole) Hendricks. He graduated from high school and joined the U. S. Army where he proudly served his country for six years, including a tour in Germany where he received a Letter of Commendation for outstanding service while performing a mission. He was also a recipient of the National Defense Service Medal and designated Sharpshooter M16. Brad worked as a mechanic most of his life and was fortunate enough to not only be good at it, but also enjoyed his work. He was an avid Harley Davidson enthusiast and loved spending time rebuilding, washing, waxing, and riding his '07 softtail Harley. He and wife Mary enjoyed short rides and occasional weekend getaways. He also enjoyed collecting Coins and was a Gun enthusiast. In 2001 he underwent extensive Heart transplant surgery in Austin. His health limited his ability to ride his bike and spend the time in the shop. He enjoyed lending a helping hand to others and was a good father and provider to his children. He is survived by his wife, Mary (Dalman) Hendricks of Richards; daughters Brandy K. Hendricks and husband Juan Ramirez of Navasota and Sara Brownell of Eureka, MO; sons Bryan K. Hendricks and fiancée Dealie Oatis of Bryan, Bradley K. Hendricks, Jr., of Richards and Eric Hendricks of Florissant, MO; step-daughters Christy Johnson-Noel of Urbana, OH, Trisha Escalante of Richards and Amanda Johnson of Urbana, OH; sisters and brothers-in-Law Cynthia Bayrel and husband Jeff of O’Fallon, MO and Bonnie Gilbert and husband Gil of Florissant; brother Gary Hendricks of Richards; 14 grandchildren and two great-grandchildren. He was preceded in death by his parents; and brothers Bruce and Sam Hendricks.

The family of Mr. Bradley Kenneth Hendricks Sr. created this Life Tributes page to make it easy to share your memories.

Send flowers to the Hendricks family.