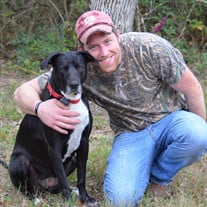 Brannon Rush Bowlin was born in Longview, Texas on January 10, 1992. He accepted Christ as his Savior at the age of six and was baptized by his grandfather, Rev. Riley Pippen at Highland Park Baptist Church on August 9, 1998. Brannon’s life was extremely too short as he was called home to be with his heavenly father on April 3, 2020, at the young age of 28, in Navasota, Texas after suffering from diabetic complications. Brannon was diagnosed with juvenile diabetes at the age of 6 after returning to the United States from Indonesia. From then on, he always saw himself different. Trying to keep his blood sugar in check was always a huge annoyance to him. Always wishing, that for just one day, he could forget about it and be “normal.” Brannon was a 2010 graduate of Cinco Ranch High School in Katy, Texas. He then attended his dream college at Texas A&M majoring in Computer Engineering. Brannon’s creative mind was fueled by his involvement in Cryptonite Robotics in high school. His Robotics mentors were so critical in forming his love of engineering and his drive to succeed in this field. Brannon was so talented in many fields…self-taught in most. In high school he taught himself how to develop iPhone apps and also learned several programming languages. He later learned how to build a computer, how to weld, how to construct furniture, and how to work on his truck. He could basically take anything apart around the house and fix it…and that means ANYTHING. He taught himself how to design and develop circuitry. He taught himself how to repair a smartphone, and even figured out how to hack the operating system to make it do what he wanted. Most recently his love was to figure out how to automate almost everything to make his life easier. That is what he lived for. His mind was a marvel to watch in person. You could see the motors turning when he looked at something and saw a way to improve it. He was a genius in his own right. Brannon was extremely talented in programming and worked for several computer software firms before his passing. He truly loved what he did until depression reared its ugly head. He developed depression as a junior at A&M and he struggled with it until the end. He also developed severe anxiety during this past year, which was absolutely debilitating. It caused him to lose his job and whittled away his self-confidence. He dealt with so much that a young adult should never have to. Aside from his physical attributes Brannon had a huge heart. He rarely expressed his love verbally but it was evident in his actions. He thrived on helping anyone with a need whether it was helping them change the oil in their car to helping them build a computer; never asking for anything in return. This was his way of showing his love to those around him. It was his way of being a loving son, brother and grandson….and most importantly being a loving friend. During Hurricane Harvey he took his lifted Ford truck and rescued people that were stranded in their flooded homes. He also extended his sense of compassion to every stray dog that came onto the property by feeding them, loving on them and trying to find their owners; and then wanting to keep them if they could not. Brannon had three rescue dogs that he loved as much as his own family. His relationship with his pets truly helped him through the emotional pain he felt daily. Brannon had a BIG, BIG heart and it will be sorely missed by those who knew him best. Our only comfort in knowing that Brannon is no longer with us is the fact that he is with our Holy Father in Heaven and that he is now made whole. He no longer has to worry about his blood sugar. He can eat whatever glorious food has been prepared at God’s table. He no longer has to experience severe anxiety when he is sitting in church feeling like everyone is staring and looking down on him. He can rejoice and praise God with his brother and sisters in Christ with total self-confidence. Brannon is survived by his father and mother, Kevin and Kim Bowlin of Navasota, TX, and his brother Britt Bowlin of McKinney, TX. He is also survived by his paternal grandmother Pat Bowlin of Mount Pleasant, SC. and maternal grandparents Rev. Riley and Deborah Pippen of Kilgore, TX. Brannon was also surrounded by his uncles, aunts and cousins who loved him very much. Brannon was preceded in death by his paternal grandfather Shug Bowlin, who greeted him at the gates of heaven. Unfortunately, due to the current state of our country given the corona virus, we are unable to give Brannon a proper funeral. The family hopes to host a memorial service at a later date. In lieu of flowers, the family would like to ask that memorial donations be made in Brannon’s name to the Anxiety and Depression Association of America (ADAA) at https://members.adaa.org/page/Donate. Please include the following Family Notification information on the donation form: Kevin and Kim Bowlin 15748 County Rd 446 Navasota, TX 77868 [email protected] The family would be honored if family and friends would share their fond memories and pictures of Brannon, either on the funeral home website at www.noblesfuneral.com or to the email address specially designated for Brannon’s memories at [email protected]

Brannon Rush Bowlin was born in Longview, Texas on January 10, 1992. He accepted Christ as his Savior at the age of six and was baptized by his grandfather, Rev. Riley Pippen at Highland Park Baptist Church on August 9, 1998. Brannon&#8217;s... View Obituary & Service Information

The family of Brannon Rush Bowlin created this Life Tributes page to make it easy to share your memories.

Brannon Rush Bowlin was born in Longview, Texas on January 10,...

Send flowers to the Bowlin family.