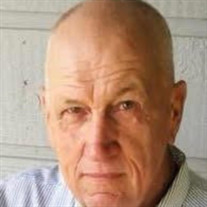 Mr. Bruce Crenshaw, 69, of Anderson, passed away Wednesday, September 15th, at CHI St. Joseph Regional Health Center. Funeral services will be held Saturday, September 25th, at 2:00 PM at Victory Church with the Rev. Keith Castleberry officiating. Visitation will begin one hour prior to the service. Interment will follow in Evergreen Cemetery in Keith. Arrangements are under the direction of Nobles Funeral Chapel. Bruce was born in Houston on November 22, 1951, to Mackree & Alice Crenshaw. Bruce married Sandra on his 18th birthday, and soon after relocated to Navasota. He began doing auto repair work at Farmer’s Clinic, then moved on to Hertenberger Chevrolet before finally going into business for himself. The man, the myth, the legend could do just about anything. From working on “junk”, building & roofing houses, to helping anyone in need, he did it all. Bruce was also a volunteer at Anderson Fire Department and was well recognized in the community. He loved his wife and family and would do anything in the world for those he loved. No questions asked. He was a long-time member of Victory Church, which he loved very much. He was preceded in death by his parents; brother Alan; sister Kathy; granddaughters, Harley & Savanna; and grandson James. Bruce is survived by his wife Sandra Crenshaw of Anderson; son and daughter-in-law Michael Bruce & Melody Helene Crenshaw; daughters and son-in-law, Kristi Elaine & Kevin Lee of Natchitoches, LA, Kimberly Michelle Crenshaw of Bryan, and Karen Jeanice Crenshaw of Bryan; brothers and daughters-in-law, James & Kay Crenshaw of Onalaska, and Clifford & DeNae Crenshaw of Bryan; sister Vicki Crenshaw of Navasota; grandchildren, Brianna, Brittney, Kristanna, Taylor, Chloe, Trenton, Logan, Isabella, Audrey, and Matthew; and great-grandson Chip. Serving as pallbearers are Trenton Nienstedt, Logan Morales, Joseph Walker, Clifford Crenshaw, Jr, Johnny Gierisch, and Edwin Schultz. The family would like to extend a heartfelt thank you to Victory Church, the staff at CHI St. Joseph and all the friends and family that have reached out with condolences during this time. “A jack of all trades is a master of none, but oftentimes better than a master of one.” Memorial contributions may be made in his name to Victory Church, 13107 State Hwy 30, College Station, TX 77845. The family invites you to leave kind words or fond memories at www.noblesfuneral.com.

The family of Mr. Bruce Crenshaw created this Life Tributes page to make it easy to share your memories.

Send flowers to the Crenshaw family.