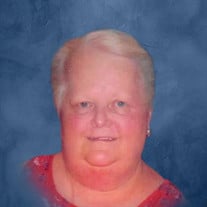 Carolyn Faye NeSmith Wellmann, 64, of Navasota, passed peacefully at home to her heavenly life on March 23rd, 2019, after more than 5 years of a courageous battle against breast cancer. Visitation is scheduled for Tuesday, March 26, 2019 at Nobles Funeral Chapel with family present from 5:00 – 8:00 p.m. Funeral services will be Wednesday, March 27, 2019 at 10 am at Friedens Church of Washington, UCC with Pastors Eric Dehmer and Glen Schoeneberg officiating. Interment will follow in the church cemetery. Arrangements are under the direction of Nobles Funeral Chapel. Carolyn was born on February 1, 1955 in Madisonville, Texas to Rosa Lee (Crouch) and Mitchell NeSmith, Sr., the third of five children. She married her best friend and love of her life, Charles William Wellmann, on June 2, 1973. They were blessed with two children, Marsha Elaine and William Ray. Carolyn is best known for her kind and generous heart, always taking care of everyone. She also had a dry sense of humor and liked to pick on her brother-in-law, Tracy. Carolyn loved her Lord and never doubted the plan he had in store for her. She was a faithful member of Friedens Church of Washington, UCC, dedicated to attending service every Sunday. Carolyn lived most of her life in Navasota, graduating from Navasota High School. She held many jobs throughout the years, always working hard to help support her family. She worked for 20 years as an instructional aide for Navasota ISD as well as 20 years managing the Subway of Navasota. Many of these years were spent working two jobs. She was a hard worker and would run circles around the best of them. She was an avid University of Texas Longhorn sports fan. She enjoyed listening to the king of rock and roll, Elvis Presley, and the king of country music, George Strait. Carolyn is survived by husband, Charles; daughter and son-in-law, Marsha and Wesley Murrell of Houston; son, William Wellmann of Navasota; sister Linda NeSmith of Brazoria; brother and sister-in-law, Mitchell NeSmith, Jr. and Kay of Clear Lake; brothers-in-law and sisters-in-law Tracy and Effie Wellmann and Craig and Cindy Wellmann, all of Washington; and numerous nieces and nephews. She was preceded in death by her parents, her mother and father-in-law, her younger sister, Sharon Steinbach, baby brother Jimmy NeSmith and beloved boxer, Hallie. Serving as pallbearers are Dalton Wellmann, Cory Marek, Keith Inglehart, Mitchell NeSmith, Steven Witt and Keith Stolz. Honorary pallbearers are Dan and Bonnie Mohr, Flora Mason, Dale Borgstedte, and Neal and Betsy Bosse. In lieu of flowers, donations can be made in memory of Carolyn Wellmann to Friedens Church of Washington or Hospice Brazos Valley. You are invited to leave kind words and fond memories at www.noblesfuneral.com.

Carolyn Faye NeSmith Wellmann, 64, of Navasota, passed peacefully at home to her heavenly life on March 23rd, 2019, after more than 5 years of a courageous battle against breast cancer. Visitation is scheduled for Tuesday, March 26, 2019 at... View Obituary & Service Information

The family of Mrs. Carolyn Faye Wellmann created this Life Tributes page to make it easy to share your memories.