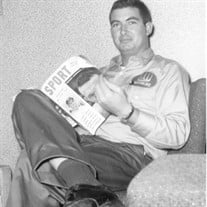 Mr. Carroll Ross Clements, 92, of Hempstead passed away Saturday, March 7th at Legacy in Bryan, Texas. A graveside service will be held Monday, March 16th at 2:00 pm at Hempstead Cemetery in Hempstead, Texas with Rev. Roy Brantley officiating. Arrangements are under the direction of Nobles Funeral Chapel. Carroll was born in Sikeston, Missouri on February 21, 1928 to James and Cora (Haynes) Clements. He was one of eight children. He loved to share stories about walking miles to attend school in a one room school house and working long days picking cotton by hand with his family. In 1950, he moved to Corpus Christi, Texas to manage the first Whataburger. He went on to train new managers at Whataburger before moving to Houston, Texas to open his own fast food business. He then moved to Navasota and opened Carroll’s Giant Burger and Donuts in 1966 where he made donuts and managed the business for 40 years. Upon his retirement in 2006, he sold the business at the age of 78. He enjoyed being outdoors and was born with a green thumb. Carroll could grow anything and enjoyed working in his yard. Left to cherish his memory are his daughters and sons-in-law Connie and Hayden Barry of Waller, Cindy Armatys of College Station, Carolyn and Steve Discher of College Station and Cathy and Jason Robison of Hempstead; son and daughter-in- law Carroll “Russ” and Donna Clements of Cypress; brother and sister-in-law Calvin and Sharon Clements; grandchildren Ashley Krolczyk and husband Matt, Trevor Barry and wife Bre, Ashley Armatys, Ryan Armatys, Katelyn Armatys, Lauren Discher, Lexie Discher, Drew Discher, Brandon Gaytan and wife Julie, Timothy Gaytan and fiancé Karley, Kayla Robison, Amy Robison and Samantha Robison and great-grandchildren Brody, Rhett and Brynn. Carroll was preceded in death by his parents, six brothers, and one sister. You are invited to leave kind words and fond memories at www.noblesfuneral.com.

The family of Mr. Carroll Ross Clements created this Life Tributes page to make it easy to share your memories.

Send flowers to the Clements family.