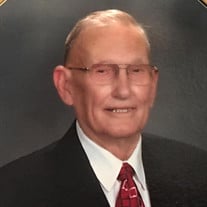 Mr. Cecil Mask, 93 went home to his heavenly Father on Wednesday, May 19, 2021. He was born August 3, 1927 in Whitehall, Grimes County, Texas to Charlie Edward Mask and Blanche Evess (Johnson) Mask. He attended Navasota High School where he was captain of football team, high point man in basketball and voted most handsome. He graduated in 1945, enlisted in the U.S. Navy, and proudly served his country until his discharge in 1946. He married his high school sweetheart and together they had a son and a daughter. To support his family, Cecil worked as a construction supervisor for the Celanese Corporation for 45 years. He started with Celanese Corporation in Bishop, Texas where he also taught little league baseball for several years. In July of 1961, he transferred to Bay City, Texas where he was an active member of the First Baptist Church and served as a Deacon. He worked at numerous plant locations for Celanese over the years until his retirement in 1996. He married Billie Wright in 1980. In 2012, he moved to a retirement community in the Grapevine – N. Richland Hills, Tarrant County, Texas area where he made many new friends and enjoyed spending time with his children, grandchildren and great-grandchildren. He enjoyed playing golf, fishing and carpentry. He loved seafood and a good steak. He was preceded in death by his parents, Charlie and Blanche Mask; brothers, Crittenden Mask and Robert Mask; sister, Gertrude Mask Nobles and wife, Billie Wright Mask. He is survived by his son and daughter-in-law, Kevin and Bea Mask, daughter, Celia Mask Shaver, grandchildren; Christopher Jenkins and his wife, Kelly, Corey Shaver, Megan Loretto and her husband, Joseph, and Kody Mask, great-grandchildren; Maxwell and Margaret Loretto and Zachariah Shaver; sister Ethelee Mask Hubble ; nephews, Bobby Mask, Skip Nobles and Ronnie Hubble and nieces, Kay Mask Keeling and Paulette Hubble Wahlquist. Funeral services are planned for 2:00 pm, Thursday, May 27th, 2021 at Nobles Funeral Chapel with a visitation of family and friends beginning at noon prior to the service. Rev. Steven Johnson will officiate and interment will follow in White Hall Fairview Cemetery. Arrangements are under the direction of Nobles Funeral Chapel.

The family of Mr. Cecil Mask created this Life Tributes page to make it easy to share your memories.

Send flowers to the Mask family.