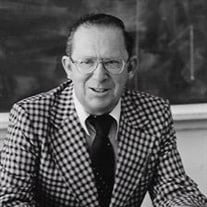 Charles Patrick Allphin was born on March 5, 1930 in Navasota, TX to Washington Peterson Allphin and Sallie Birmingham Allphin. He passed away on March 30, 2017 in Bryan, TX. Many in Navasota knew him as Charley, although he insisted that his kids and grandkids address him as Grump. Charley grew up in Navasota, graduated from Navasota High School and attended Sam Houston State College where he was a member of the Alpha Phi Omega fraternity. Charley graduated with a BA in 1953 and served two years active duty stateside in the United States Army before beginning a lifelong career in education, starting out in Brownsville where he met his former wife, Clela Allphin Hoggatt, also a teacher. While teaching, he earned a Master’s degree and later moved his family to El Paso, Tucson, and ultimately to Los Angeles to teach and to raise five children. After a divorce, Charley committed himself to remaining a loving father, supporting and nurturing his children as much as possible. This included annual and very memorable road trips from Los Angeles to Navasota, ultimately visiting nearly all national parks and amusements west of the Mississippi. In 1994 he retired after 30 years of teaching economics and history in the Los Angeles school district and moved back to Navasota. Charley had an uncanny recollection of family and local history, a big heart and even bigger dreams, and an adventurous spirit that persisted even in his final days. He was a shutterbug who enjoyed photography immensely, an avid reader especially in retirement, an opinionated lifelong Democrat, and a devoted member of his church. He was preceded in death by his father Washington Peterson Allphin, his mother Sallie Birmingham Allphin, his brother James Peterson (Pete) Allphin, his nephew James Christopher Allphin, cousins Robert Weatherly and wife Katy, Audrey Ann Nelson, Ruby Rank, and Jack Nelson. He is survived by his children Beverly Allphin, Valerie and husband Roman Jariabek, Arthur Allphin, Clark Allphin and wife Paddy, and Frances and husband Ben Mack; his grandchildren Brett and Jenna Jariabek; cousins Roy Paris, John and Betty Nelson, Alice Nelson Winslow, Paul and Judy Nelson, Leslie and Laura Wright, Charles and Jackie Wright, Carol Jean and Bernie Gessner, Ann Kapella, Linda and John Walicek; special family friends Angel and Gracie Barrios and their children Ericksol and Wendoline; loving church family of St Paul's Episcopal of Navasota; and many friends. Memorial service will be held at St. Paul’s Episcopal Church, Navasota on April 8, 2017. Visitation for family and friends will be at 12 noon, followed by service at 1 pm. Donations may be given in his memory to St. Paul’s Episcopal Church, 414 E. McAlpine, Navasota, TX 77868 or a charity of your choice.

Charles Patrick Allphin was born on March 5, 1930 in Navasota, TX to Washington Peterson Allphin and Sallie Birmingham Allphin. He passed away on March 30, 2017 in Bryan, TX. Many in Navasota knew him as Charley, although he insisted that... View Obituary & Service Information

The family of Mr. Charles Patrick Allphin created this Life Tributes page to make it easy to share your memories.

Send flowers to the Allphin family.