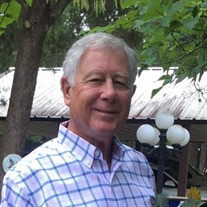 Charles “Charlie” Oran McDuffie, Jr., passed away Tuesday, February 15th near his home in Iola, Texas. Visitation with family and friends will be held from 5:00 – 7:00 pm, Tuesday, February 22nd at Nobles Funeral Chapel in Navasota with a rosary following at 7:00 pm. A funeral Mass celebrating his life will be held at 10:00 am, Wednesday, February 23rd at Christ Our Light Catholic Church in Navasota. Rev. Eli Lopez will officiate. Arrangements are under the direction of Nobles Funeral Chapel. Charlie was born March 23rd, 1944 in Houston, Texas to Charles Oran, Sr., and Mary Lillian (Bean) McDuffie. He grew up in Houston, but spent his weekends and summers in Iola. He attended and graduated from Stephen F. Austin High School in Houston in 1962 and attended college at Blinn, SFA and Texas A&M. Charlie proudly served his country in the Army Texas Airborne National Guard from 1968 – 1974. He married his soulmate, Ann Herzog Buckner in Iola on June 1, 1994 and they blended their families almost flawlessly; creating a home of love consisting of their children, grandchildren and then great-grandchildren. Charlie worked as a cattle buyer and manager for Capital Cattle Company in Austin, Texas from 1967 – 1973. He then worked as an oilfield consultant and in production; and then cattle rancher throughout his life. His favorite place to be was anywhere that Ann was. Together, they did life. He loved to fly fish, hike, camp, backpack, hunt and travel. He was game for anything, anywhere… as long as Ann was there by his side with him. Trips to Alaska and a backpacking trip through Ireland were favorite memories of his. Charlie was determined, fun, had a huge heart and a smile that lit up a room. He lived life wide open, and was full of adventure and laughs. She was the light of his life and he was Ann’s favorite hello and her hardest goodbye. Left to cherish his memory are his wife of almost 28 years, Ann McDuffie; sons and daughters-in-law John William and Kim McDuffie, Charles O. McDuffie, III; stepson Todd Buckner and wife Debbie; stepdaughters Stacy Buckner and partner Mark Morgan and Donna Buckner Lund and husband, Michael; brother and sister-in-law Durward and Molly McDuffie; sister and brother-in-law Charlene and Charles Denman; grandchildren Tyler, Shelbi (Israel), Jessica, Kristen (Patrick), Mia, Dylan, Diane (Tim), Blaine (Molly), Darren (Raechelle), Dana (Bryan), Spencer and Slaton and great-grandchildren Korbin, Zoey, Nixon, Andlyn, Skylar, Ramsey, Jewels, Lillian, Hudson and Grant. Serving as pallbearers are Jim Schwertner, Billy Schwertner, Larry Isbell, Chad Guidry, Mark Morgan, Don Sowell, Darrell Herzog and Ben Leman. Honorary bearers are Joe Bax, Josh David, John Lackey, Chris Dickson, Ronnie Lewis, Tyler McDuffie, Blaine Buckner, Spencer Savoy, Slaton Savoy and Darren Gillis. Preceding him in death were his parents. In lieu of flowers, the family suggests that a memorial contribution be made in his memory to St. Stanislaus Catholic Church in Anderson, Attn: CCE Building Fund and Church Renovations/Repair, P. O. Box 210, Anderson, Texas 77830 OR Cattleman’s Memorial Scholarship, 10977 CR 112, Iola, Texas 77861. You are invited to leave kind words and fond memories at www.noblesfuneral.com.

The family of Mr. Charles "Charlie" Oran McDuffie Jr. created this Life Tributes page to make it easy to share your memories.

Send flowers to the McDuffie family.