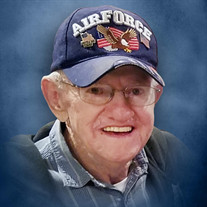 Mr. Charles Oscar Crowder, 84, of Bossier City, Louisiana passed away and went to be with his Lord on Tuesday, January 21, 2020 at the Promise Hospital in Bossier City. Funeral services will be held graveside on Saturday, February 1st at 10 a.m. in the Oakland Cemetery, Navasota, Texas, with the Rev. Henry Sanders officiating. Arrangements are under the direction of Nobles Funeral Chapel. Charles was born on July 1, 1935 in LaGrange, Kentucky, the ninth of ten children, to Eugene Hobert and Lura Etta (Dallas) Crowder. He joined the United States Airforce in 1954 before marrying the love of his life, Valda Gene (Jean) McNew of Big Spring, Texas on July 2, 1955. He loved playing the guitar, which he was excellent at doing. He chose staying at home to raise his family instead of playing professionally and traveling on the road. Before retiring in 1993, Charles and his family ran service stations and fishing tackle businesses in Kentucky. After selling his businesses and retiring, he and his wife did some traveling and then moved to Texas to be with their sons and grandchildren. He was an avid fisherman and loved being on the water in his boat wetting a hook. Besides fishing and picking at his guitar, he started selling purses and leather goods in parking lots and flea markets across Navasota and the surrounding area. He loved talking with people and was known as the “Purse Man” in the white van. His siblings described him as a “one-of-a-kind brother” who was always positive, loving his family and never sitting still. He always had a smile on his face and never met a stranger. His three sons described him as being a wonderful father, keeping the family together and raised them to be honest and respectable men. Thank you Dad for being the Greatest Dad we could ever ask for. Charles was preceded in death by his wife, Valda Gene Crowder; parents, Eugene Hobert and Lura Etta (Dallas) Crowder; brothers, William E. (Bud) Crowder, John W. (Jay) Crowder, Joseph H. (Joe) Crowder; sisters, Lillian M. Speer, Jessie M. Smith, Edna M. Fendley, Helen F. Crowder; brothers-in-law, Amos Speer, James A. (Jimmy) Smith, Clayton Fendley; sisters-in-law, Pauline Crowder, Lois Crowder. He is survived by his sons and daughters-in-law, Charles R. (Randy) Crowder, Marty D. and Angela Crowder, Danny B. and Jamie R. Crowder; sisters and brother-in-law, Wilma M. (Crowder) Thompson, Joann E. (Crowder) and Jay Emery; sister-in-law, Patricia (Pat) Crowder; grandchildren, Billy Crowder, Shaun Crowder, Aleesha Elliott, Amber Jester and husband Kenny, Tyler Crowder and wife Jennifer, Brien Crowder, Chase Crowder; and great grandchildren, Taylor Crowder, Abbey Crowder, Annika Crowder, Russell Elliott III, Alana Elliott, Ruby Elliott, Wesley Jester, Gabriel Crowder. A special thank you to our dear cousin Shirley (Crowder) Culotta and family for graciously giving care to our dad during his last years with us. Serving as pallbearers are Tyler Crowder, Brien Crowder, Chase Crowder, Kenny Jester, John Shine and Steve Powell. All active military and veterans are welcome to attend and celebrate Charles’ life with his family and friends. You are invited to leave kind words and fond memories at www.noblesfuneral.com.

Mr. Charles Oscar Crowder, 84, of Bossier City, Louisiana passed away and went to be with his Lord on Tuesday, January 21, 2020 at the Promise Hospital in Bossier City. Funeral services will be held graveside on Saturday, February 1st at 10... View Obituary & Service Information

The family of Mr. Charles O. Crowder created this Life Tributes page to make it easy to share your memories.

Send flowers to the Crowder family.