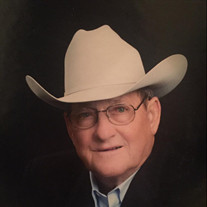 Charles Alan Mock, age 75 of Dobbin, Texas passed away peacefully on Wednesday, May 3, 2017, at his home. Visitation will take place at St. Mary’s Catholic Church in Plantersville from 5 p.m. to 7 p.m. Sunday, May 7th with a rosary at 7 p.m. A funeral Mass will be celebrated at 10:30 a.m. Monday, May 8th at Saint Mary’s. Arrangements are under the direction of Nobles Funeral Chapel, Navasota, Texas. Born August 20, 1941, in Navasota, Texas to Joe and Marguerite Fowler Mock, he was the 3rd of 4 boys. Charles graduated from Montgomery High School in 1959. He proudly served as a Sergeant in the Army, stationed at Fort Riley, Kansas, before being deployed to Vietnam. After his honorable discharge, he returned home, and married Aleen Herzog on September 17, 1966 and together they raised 3 daughters. Charles worked in the forestry industry for 18 years for Mitchell & Mitchell Energy & Development and retired from the Woodlands Community Services Corporation. Charles loved to hunt, raise cattle, and farm. He had a special place in his heart for his daughter’s involvement in raising rabbits, steers and lambs, and showing at the Houston Livestock Show and Rodeo and the Montgomery County Fair where he was a Lifetime member, serving on the Swine Committee, Steer Committee, & Greeters Committee for many years. He served as a member of the Montgomery ISD School Board as well as a member of the Texas F.F.A. Young Farmers. He was a parishioner at Saint Mary’s Catholic Church where he was baptized, confirmed and married. He was preceded in death by his parents; brothers, William Mock and Joe Cliff Mock. Charles is survived by his loving wife of 50 years, Aleen Herzog Mock, daughters Michelle Tish and husband Dwight Tish of Belton, Meredith Taylor and husband Ben Taylor of Coleman, and daughter Marla Mock of Waco. Granddaughter Jamie Tish Mobley and husband Austin Mobley, and the first great grandchild due in November of Azle, grandsons Nathan Taylor of Fairbanks, AK, Dustin Tish from Belton, and granddaughter Megan Taylor of Coleman. Serving as pallbearers are Dustin Tish, Nathan Taylor, Greg Mock, Chad Mock, William Mock, Cliff Mock, Lonnie Hernandez, Tate Wheelis, and honorary pallbearers are John Merdian, Dr. Henry Carwile, Mike Schroeder, Paul Malek, Mark Minter and Wade Owen Wheelis. A luncheon well be served in the parish hall immediately after the graveside services. In lieu of flowers, donations may be made in honor of Charles Mock to the Montgomery County Fair Association, P.O. Box 869, Conroe, TX 77305, or St. Mary’s Restoration Fund, P.O. Box 388, Plantersville, TX 77363. You are invited to leave kind words and fond memories at www.noblesfuneralhome.com

Charles Alan Mock, age 75 of Dobbin, Texas passed away peacefully on Wednesday, May 3, 2017, at his home. Visitation will take place at St. Mary&#8217;s Catholic Church in Plantersville from 5 p.m. to 7 p.m. Sunday, May 7th with a rosary at... View Obituary & Service Information

The family of Mr. Charles Alan Mock created this Life Tributes page to make it easy to share your memories.

Send flowers to the Mock family.