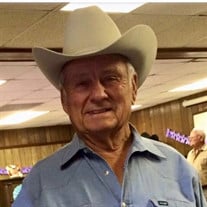 Mr. Charles M. Rhodes, 85 of North Zulch, passed away Wednesday, May 9th at his home. Visitation will be Sunday, May 13th from 5:00-7:00PM at Nobles Funeral Chapel. Funeral services will be held Monday, May 14th at 11:00AM at Sand Prairie Baptist Church in North Zulch with the Rev. Larry Andrews officiating. Interment will follow in George Cemetery. Arrangements are under the direction of Nobles Funeral Chapel. Charles was born in Edge, TX, on December 19, 1932, the son of C.E. & Nina (Martin) Rhodes. He lived his life by the teachings of the Lord. He was a man of faith and prayer and, besides his family, his church was his most prized possession. If there was a church service being held, you could count on him being there. Charles loved the outdoors and was no stranger to hard work. In his early years he spent many early mornings and late nights running his family dairy. His love for horses also entertained most of his life as he worked as a farrier, trained and rode cutting horses and his favorite past time with his son Marty at the race track. Charles was also known for the love of his garden and the countless hours he spent on his hands and knees making sure it was done and done right. There is no doubt he was a favorite at church during garden season because he was always proud to share his abundance of vegetables. Charles also was known to never turn down a good game of 42 and wore out many sets of dominos as he enjoyed time with his children, grandchildren and great-grandchildren. His weekends weren’t complete if they didn’t include church and an afternoon of watching bull riding and football. Charles was a man who never met a stranger and was guaranteed to bring a smile to the face of everyone in the room. He loved his wife, children, and grandchildren and above all he loved the Lord. He was preceded in death by his parents; sons, Marty & Bobby Rhodes; brother, Bobby J. Rhodes; and sister, Martha Rabun. Charles is survived by his wife, Wanda Rhodes of North Zulch; daughters, Charla Busa of Richards and Cheryl Burzynski and husband Floyd of Stoneham; sister, Nina Ruth Crane and husband Stan of Navasota; grandchildren, Nicole & Brad Harrington, Blake & Stephanie Burzynski, Tara & Nick Greer, Shane Busa, Ryan Burzynski, Brittany & Justin Norwood, Seth Rhodes and Colton Rhodes; 8 great-grandchildren; step-children, Mary Sanders, Monica (Mona) Jones and husband David, Allen Palermo, and wife Dena, Todd Palermo; 10 step-grandchildren; and 8 step-great grandchildren including 1 in heaven. Serving as pallbearers are Blake Burzynski, Ryan Burzynski, Shane Busa, Seth Rhodes, Colton Rhodes, Douglas McBride, and Hagan Burzynski. Honorary pallbearers include Ronnie Nickerson, Randy Musgrove, Lew Plotts, Ivan Linebaugh, Dean Lewis and H.C. Manning. For those that desire, memorial contributions may be made in Charles’ memory to the Sand Prairie Baptist Church, P.O. Box 100, North Zulch, TX 77872.

Mr. Charles M. Rhodes, 85 of North Zulch, passed away Wednesday, May 9th at his home. Visitation will be Sunday, May 13th from 5:00-7:00PM at Nobles Funeral Chapel. Funeral services will be held Monday, May 14th at 11:00AM at Sand Prairie... View Obituary & Service Information

The family of Mr. Charles M. Rhodes created this Life Tributes page to make it easy to share your memories.

Send flowers to the Rhodes family.