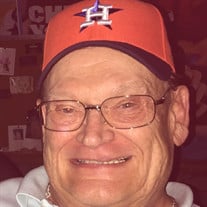 Charles “Charlie” Vaughn, 67 of Navasota passed away Wednesday, December 6th at his home. A memorial service celebrating his life will be held at the VFW Post 4692 in Bryan, Texas at 11:00am, Thursday, December 14th. John Velasquez will officiate. Arrangements are under the direction of Nobles Funeral Chapel. Charlie was born November 10, 1950 in Alvin, Texas to George Edward and Opal Faye (Perkins) Vaughn. After high school, Charlie joined the United States Marine Corps and proudly served his country during the Vietnam War. Upon his honorable discharge and return stateside, Charlie joined his father installing flooring for several years. He broadened his skills and began working general construction until the oil boom of the 80’s, at which time he began working for an oilfield casing firm. When the oil industry became unsteady, Charlie needed a more stable income and so he obtained his agents license and began working for a life insurance company, a career he would remain in until health complications related to his tour in Vietnam dictated an early retirement. Charlie enjoyed fishing, hunting, watching football, baseball, NASCAR and documentaries on TV. He and his wife, Michele loved to travel, whether it be cruises or road trips. Although it may have taken a bit longer, Charlie enjoyed taking the “back roads”, a more laid back, relaxing trip that often afforded the best views. He was a quiet, reserved man with a quick wit and trusted demeanor. He cherished those he called his friends, and always enjoyed spending time with his VFW Post 4692 family. Charlie is survived by his wife, Michele Vaughn of Navasota; daughter and son-in-law Bridget and Shane Wright of Limon, CO; sons and daughter-in-law David Vaughn of Honolulu, HI and Brady and Lacy Vaughn of Rockdale, TX; parents George and Opal Vaughn of Santa Fe, TX; brother and sister-in-law Wayne and Donna Vaughn of Santa Fe, TX; grandchildren Briana Wright, Davis Vaughn and Katlyn Wright and his devoted canine companion, Koda. He was preceded in death by his grandparents and brother Calvin Vaughn. In lieu of flowers, please consider a memorial contribution in Charlie's memory to V.F.W. Post 4692 ((Veterans Relief Fund), 794 N. Harvey Mitchell Parkway, Bryan, TX; The Honor Flight Network, Attention Diane Gresse, 175 South Tuttle Road, Springfield OH 45505 or www.honorflight.org. You are invited to leave kind words and fond memories at www.noblesfuneral.com.

Charles &#8220;Charlie&#8221; Vaughn, 67 of Navasota passed away Wednesday, December 6th at his home. A memorial service celebrating his life will be held at the VFW Post 4692 in Bryan, Texas at 11:00am, Thursday, December 14th. John Velasquez... View Obituary & Service Information

The family of Mr. Charles "Charlie" Vaughn created this Life Tributes page to make it easy to share your memories.

Send flowers to the Vaughn family.