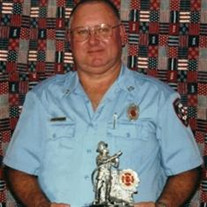 Charles William Wellmann, 70, of Navasota, passed on October 18th, 2019, after a brave battle with pancreatic cancer. He was reunited in heaven with the love of his life, Carolyn. Visitation is scheduled for Wednesday, October 23, 2019 at Nobles Funeral Chapel with family present from 5:00 – 7:00 p.m. Funeral services will be held Thursday, October 24, 2019 at 11 am at Friedens Church of Washington, UCC with Pastor Eric Dehmer officiating. Interment will follow in the church cemetery. Arrangements are under the direction of Nobles Funeral Chapel. Charles was born on July 5, 1949, in Brenham, Texas, to William Henry “Pete” Wellmann and Leona Mae Preuss. He married his best friend and love of his life, Carolyn NeSmith Wellmann, on June 2, 1973. They were blessed with two children, Marsha Elaine and William Ray. Charles is best known for his ability to fix everything, a jack of all trades, he could “Wellmann-ize” anything. He would help anyone who needed it. Charles is remembered as being a patient and kind mentor always willing to lend a hand. Well, always patient might be a slight exaggeration, but he never turned his back on anyone. He was a faithful member of Friedens Church of Washington, UCC, dedicated to attending service every Sunday. He served on the church council numerous times through the years. He even laid the original carpet in the church that was just now replaced after 47 years. Charles was also a member of the Washington Shooting Club for over 30 years. Charles moved with his parents to Houston when he was young. He attended Love Elementary and James S. Hogg Jr High before the family moved out to Old Washington where his parents had bought a general store and gas station. He spent years working at both his father’s and his Uncle James’ dairies. He graduated from Brenham High School in 1969. He worked for a floor covering company in Brenham before joining the Navasota police force. He attended police academy at TEEX and served as a Navasota police officer for a year. He remained working as a reserve police officer and reserve sheriff’s deputy for many years thereafter. He also worked at Turner Pierce and Hackney before devoting his life to firefighting. Charles helped establish the Washington Volunteer Fire Department back in 1970. After marrying and moving to Navasota, he joined the Navasota Volunteer Fire Department. A couple years later he was working as a part-time paid fireman. In 1981 he joined the Navasota fire department as a full-time paid fireman. There were 2 at that time who alternated 24-on and 24-off shifts. Over the next 40 plus years he worked as a full-time fireman and spent the remainder of his hours as an all-around handyman, carpenter, appliance installer and repairman and continued to work part-time for Turner Pierce and Fultz. Charles retired from full-time firefighting in 2015 although he never left the department. He remained a dedicated volunteer and regular coffee drinker down at the station. Charles is survived by his daughter and son-in-law, Marsha and Wesley Murrell of Houston; son, William Wellmann of Navasota; brothers and sisters-in-law Tracy and Effie Wellmann and Craig and Cindy Wellmann, all of Washington; sister-in-law Linda NeSmith of Brazoria; brother-in-law and sister-in-law, Mitchell NeSmith, Jr. and Kay of Clear Lake; and a number of cherished nieces and nephews. He was preceded in death by his beloved wife, Carolyn, and his parents. Serving as pallbearers are firefighters: Larry White, Michael Borne, David Cooper, John Flores, John Hicks, George Korpita, and Mitchell Kroll. In lieu of flowers, donations can be made in memory of Charles Wellmann to Friedens Church of Washington or Navasota Fire Department. You are invited to leave kind words and fond memories at www.noblesfuneral.com.

Charles William Wellmann, 70, of Navasota, passed on October 18th, 2019, after a brave battle with pancreatic cancer. He was reunited in heaven with the love of his life, Carolyn. Visitation is scheduled for Wednesday, October 23, 2019 at... View Obituary & Service Information

The family of Mr. Charles William Wellmann created this Life Tributes page to make it easy to share your memories.