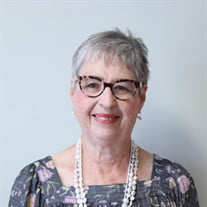 Charlotte Kaye Harbour Moody, 76, of Piedmont, went home to be with her Lord and Savior, early Sunday morning, August 16, 2020, after a courageous battle with liver cancer. Visitation will be Thursday evening from 5:00 to 7:00 pm at Nobles Funeral Chapel, 402 East Blackshear Street, Navasota, Texas 77868. A Celebration of Life Service will be held Friday morning at 10:00 am at the First Baptist Church of Bryan, 3100 Cambridge Drive, Bryan, Texas 77802. Her graveside service will follow at Erwin Cemetery off of FM 3090 in Anderson, Texas. Pallbearers will be Billy Binford, Alexander Lamb, Rob Lamb, Cody Miller, Emmett Moody, JD Moody. Graveside pallbearers will be Doug Bass, Tyson Bouler, Isaac Fife, Johnathan Flores, Clint Mazurkiewicz, Jerrad Moody, Justin Thane, and Kirk Wichman. Honorary pallbearers will be Parker Bodin, Wilson Freeman, and Dexter Lavender. Charlotte was the only child of Gaston Harbour and Katherine Kersh. She was born January 19, 1944, in Amarillo during WW II when Gaston worked at Pantex. The family moved to Shamrock, Texas in 1946. She was active in the First Baptist Church of Shamrock where she played the piano and organ. While in high school, Charlotte was involved in many activities such as Latin Club, Future Teachers of America, Speech, Choir, Drama, Rainbow Girls, and later graduated in 1962. After high school, Charlotte came to Waco, Texas to attend Baylor University. That fall, she had a blind date with an Aggie named David Moody. It was love at first sight. He later transferred to Baylor, and they were married in Waco on March 19, 1965 at Columbus Avenue Baptist Church. She received her B.A. degree in elementary education in 1967. Charlotte and David manufactured trailers through their company DEMCO for sixteen years. After selling the corporation in 1982, David pursued his interests in various farming and ranching entities, and Charlotte began a new twenty-three-year career as a Financial Aid Counselor for Baylor University where she loved ministering to students. Charlotte’s other passion was serving as co-director of the preschool choir at Columbus Avenue teaching music and sharing Jesus with children for almost two decades. Upon retiring, she moved to the family ranch in Piedmont, Texas where she enjoyed her remaining years gardening, collecting glass, searching for antiques, and researching her family ancestry. Charlotte was very active in the First Baptist Church of Bryan, the Navasota Garden Club where she served as President, Daughters of the American Revolution where she served as 2nd Vice Regent, Two Rivers Historical Society, and the Order of the Eastern Star. Charlotte was preceded in death by her husband, David Evans Moody in 2006, and her parents, Mr. and Mrs. Gaston Harbour of Shamrock, Texas. She is survived by her daughter, Janet Moody Lamb and spouse Rob Lamb of Anderson, Texas; her son Michael Moody of Anderson, Texas; and her daughter Laura Moody Miller and spouse Cody Miller of Robinson, Texas. Her grandchildren: Analeigh Lamb and Alexander Lamb, both of Anderson, Texas; Caleb Miller and Brooklyn Miller, both of Robinson, Texas.

Charlotte Kaye Harbour Moody, 76, of Piedmont, went home to be with her Lord and Savior, early Sunday morning, August 16, 2020, after a courageous battle with liver cancer. Visitation will be Thursday evening from 5:00 to 7:00 pm at Nobles Funeral... View Obituary & Service Information

The family of Mrs. Charlotte Harbour Moody created this Life Tributes page to make it easy to share your memories.

Charlotte Kaye Harbour Moody, 76, of Piedmont, went home to be...

Send flowers to the Moody family.