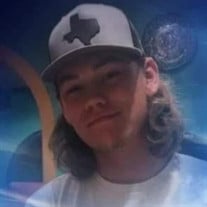 Christian “Chris” Joel Burns, 21 of Bryan (formerly of Plantersville) passed away Saturday, September 12th at his home. Visitation with family and friends will be held from 5:00 – 7:00 pm Friday, September 18th at Nobles Funeral Chapel. A memorial service celebrating his life will be held on Saturday at 11:00 am, also at the funeral home. Pastor Henry Sanders will officiate. Arrangements are under the direction of Nobles Funeral Chapel. Chris was born in Bryan, Texas on December 14, 1999. He was the third of four children born to Michelle Lee Burns. At the age of four, Chris’ mother was tragically killed in an automobile accident and the four children were raised by his maternal grandmother in Plantersville. He attended school at Anderson-Shiro ISD and played baseball, basketball and football. After high school, Chris moved to Bryan where he worked in construction maintenance. He was a free spirit who loved hard and was sometimes hard to love. Losing his mother at such a young age, Chris struggled with depression and tumultuous emotions throughout his life, and although sometimes quick to anger, he was even quicker to flash a killer smile and follow it up with the best hugs. Chris and his younger brother, Joey, were extremely close, more like best friends than brothers. His sisters, Jessica and Cassie, were older and although they experienced their differences, the four of them shared an unshakable bond. Chis and Joey enjoyed doing everything together, especially road trips. The most recent to Padre Island. Chris loved his grandma, and although he seldom heeded it, he often sought her advice – before doing it his way in the end. He loved being outdoors – hunting, fishing, the beach or just working on his vehicle. He was proud of shooting his first deer at the age of 14 while hunting with his Uncle Jimmy. He also enjoyed spending time with his nephews Trace and Dean and his cousin Wyatt. Chris is survived by his grandmother, Cheryl Peet; brother Joey Burns; sisters Jessica O’Neill and Cassie Burns; aunt and uncle Jannel and Jimmy Vann; girlfriend Shelby Oliver and his mentor, Mike Torres. He was preceded in death by his grandfather, Butch Peet and his mother, Michelle Burns. In lieu of flowers, the family suggests a memorable contribution in his name be made to the American Foundation for Suicide Prevention (AFSP) at https://afsp.donordrive.com/campaign/Christian-Joel-Burns-Memorial-Fund. You are invited to leave kind words and fond memories at www.noblesfuneral.com.

The family of Christian Joel Burns created this Life Tributes page to make it easy to share your memories.

Send flowers to the Burns family.