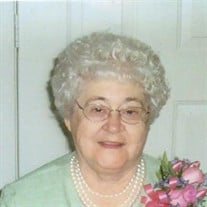 Mrs. Clara L. Finke, 89, of Navasota, passed away Thursday, January 7th at her home. Visitation with family and friends will be held from 5:00 – 8:00pm, with a prayer service at 7:00pm, Saturday, January 9, 2016 at Nobles Funeral Chapel. A celebration of her life will be held at 2:00pm, Sunday, January 10th at Salem Lutheran Church in White Hall, followed by interment in the church cemetery. Rev. Chris Richardson will officiate. Arrangements are under the direction of Nobles Funeral Chapel. Clara was born in Anderson, Texas on August 2, 1926 to Herman and Emma (Horn) Leiber. She met and married Mr. Fred W. Finke in 1949 and together they raised two daughters. She is survived by her daughters and sons-in-law Barbara and Art Courville of Navasota and Carolyn and Stanley Kettler, also of Navasota; brother Edward Leiber of Navasota; sister-in-law and brother-in-law Wilbur and Betty Finke of Houston; and sister-in-law Joyce Leiber of Anderson; grandchildren Tammy Hughson of Caldwell, Kathy and Grady Harris of Navasota, Bart and Rhea Courville of Navasota, Robert and Jessica Kettler of Washington; and great-grandchildren Connor and Kendall Hughson, Colton, Cody and Samantha Harris, and Madison and Michael Kettler. Mrs. Finke was preceded in death by her parents; husband, Fred W. Finke; brothers and sisters-in-law George and Alvina Leiber; Herman and Julia Leiber, Oscar and Adeline Leiber, Fred Leiber, Janet Leiber, mother –in-law and father-in-Law Gus and Ellie Finke. Her grandsons and great-grandsons will serve as pallbearers and her granddaughters and great-granddaughters will serve as honorary pallbearers. In lieu of flowers, the family asks that you consider a memorial donation to Salem Lutheran Church. You are invited to leave kind words and fond memories at www.noblesfuneral.com.

The family of Mrs. Clara L. Finke created this Life Tributes page to make it easy to share your memories.

Send flowers to the Finke family.