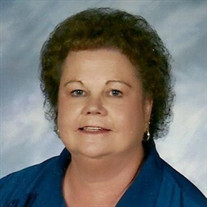 Connie Pistler Perry, 69 of Anderson, passed away peacefully on Monday, July 12th at her home in Anderson. Visitation with family and friends will be held from 5:00-7:00pm, Friday, July 16th at Nobles Funeral Chapel in Navasota, Texas, A celebration of her life will be held at 10:00am, Saturday, July 17th at Zion Lutheran Church in Anderson with Rev. Richard Lamb officiating. Interment will follow at Odd Fellows Cemetery in Anderson. Arrangements are under the direction of Nobles Funeral Chapel. Connie was born in Navasota, Texas on March 14, 1952 to Lonnie and Elsie (Leiber) Pistler. She attended and graduated from Anderson ISD in 1970 then attended Blinn College. She proudly served the citizens and taxpayers of Grimes County for 45 years. She began working in the tax office in 1971 under Claude Jolly. In 1995 she was promoted to Chief Deputy, then elected as Tax Assessor Collector in 1997. She served 5 terms in office then retired in 2016. Connie was well known for providing friendly customer service and collecting the tax dollars with a smile. On May 1, 1976, Connie married Hershel Perry, Jr. at Zion Lutheran Church in Anderson, and together they had two children. Connie was a loving and kindhearted person. She cherished spending time with her family and friends, especially her grandchildren who gave her the best hugs. She enjoyed baking and was well known for her delicious cakes that could be found at many fundraising auctions in the county. She was a member of Zion Lutheran Church and an active member of the local community. She volunteered her time with the Anderson Volunteer Fire Department, Child Protective Services Board and the Brazos Valley Council of Governments. She enjoyed attending Grimes County 4-H events and participating in the Grimes County Republican Women. She was preceded in death by her parents. Connie is survived by her daughter and son-in-law Danielle and Patrick Moriarty of Richards, and son and daughter-in-law Hershel Perry III and Julie of Anderson, grandchildren, Marlee and Parker Moriarty, Ivey and Aubrey Perry, brother and sister-in-law Bobby and Jodi Pistler and nieces and nephews. Serving as pallbearers are Reese Pistler, Trevor Pistler, Wes Male, Jared Perry, Robert Perry, Jr. and Burnett Leiber, Jr. Honorary pallbearers include long-time friends and family Don Sowell, Kenny Sechelski, Randy Cleere, Bill Boehm, Curtis Wayne Leiber and Leon Cummins. In lieu of flowers, please consider a memorial contribution in her name to Zion Lutheran Church, PO Box 409, Anderson, Texas 77830. The family wishes to extend a special thanks to Connie’s caregivers Kathy Burzynski and Mary Sicinski, and the entire Grimes County community for their prayers, love and support. The outpouring of compassion and caring has been a true blessing throughout this difficult time. You are invited to leave kind words and fond memories at www.noblesfuneral.com.

Connie Pistler Perry, 69 of Anderson, passed away peacefully on Monday, July 12th at her home in Anderson. Visitation with family and friends will be held from 5:00-7:00pm, Friday, July 16th at Nobles Funeral Chapel in Navasota, Texas, A celebration... View Obituary & Service Information

The family of Connie Pistler Perry created this Life Tributes page to make it easy to share your memories.

Send flowers to the Perry family.