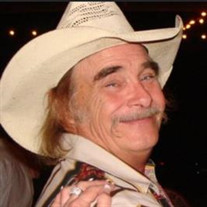 Mr. Curtis Earl West, 75, of Magnolia, passed away Sunday, January 9, 2022, at Angel’s Place Care Home in Montgomery. Graveside services will be held 10:30 AM, Saturday, January 15, in Plantersville Cemetery with the Rev. Rommie Lavergne officiating. Arrangements are under the direction of Nobles Funeral Chapel. Curtis was born in Houston, TX, on January 9, 1947, the son of Johnnie & Zetta West. Curtis was born and raised in North Houston. He was one of 7 siblings. Curtis had many stories to tell from his younger years growing up with his brothers and sisters. He was drafted into the US Army in 1968 and served 2 years during the Vietnam War. He had two children, Tammy and Trenia there after and was married to his lovely wife, Doris for 46 year. His passion was his Peterbilts, his family time and the great outdoors taking his grandkids hunting. Curtis had an amazing 75 years of life to be celebrated. He was preceded in death by his parents and step-father, Eli J. Kendrick; wife Doris Jean West; brothers, Coy Eldridge West, Johnnie O’Dell West, and Earnest Ray West; and sister Elder Mae Kelley. Curtis is survived by his daughters and son-in-law, Trenia & Charles Collins and Tammy West; brothers and sister-in-law, Carl Lingold West and Jackie Ellis & Renee West; grandchildren, Audrey Collins, Nathan Collins, Tyler West, and Tanner West; great-grandchild, Nicole West; and numerous nieces and nephews.

The family of Mr. Curtis Earl West created this Life Tributes page to make it easy to share your memories.

Send flowers to the West family.