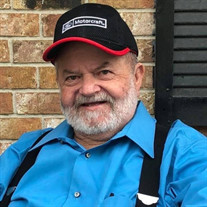 Donald Ray “Shorty” Nobles, 77,of Navasota, passed away Tuesday, March 8th, 2022. Visitation with family and friends will be held on Thursday March 10th from 5:00 -7:00 pm at Nobles Funeral Chapel. A celebration of his life will be Friday March 11th at 3:00 pm, also at the chapel, with interment following in Oakland Cemetery. Pastor Henry Sanders will officiate. Family and friends are invited afterward to gather and reminisce at the VFW. Arrangements are under the direction of Nobles Funeral Chapel. Shorty was born August 27, 1944 in Navasota to Eugene and Alma Nobles. He grew up in Navasota with his 10 siblings. He was a master plumber for majority of his life, which allowed him to work side by side with some of his brothers. He found joy in hunting and fishing and the “occasional” night at the beer joint. He was a loving father, grandfather and friend to anyone who knew him. He spent the remaining 30 years of his life sharing it with his wife, Gerry watching his family grow from children to grandchildren and great grandchildren. He was known by everyone, loved by many and will be missed for an eternity. He was proceeded in death by his son, Donald Ray Nobles Jr,; stepson Johnny Orlando; parents, Eugene and Alma Nobles; first wife Patricia Nobles; brothers Earnest, Vernon, Irving, Russell, Thomas, and Joe Nobles; and sisters Sally Tyler, Pearl Roese, Doris Moreland and Kathy Avant. He is survived by his wife of 25 years Geraldine “Gerry” Nobles of Navasota; sister Effie Addicks of Brenham, daughters Felicia Nobles of Conroe, Rhonda Foster and husband Joey of Jacksonville; son Caleb Orlando of Navasota; stepson Tommy Orlando of Navasota; stepson Jimmy Orlando and wife Debra of Navasota; grandchildren Rueben Tamez and wife Jennifer of Spring, Kassie Avant of Spring, Jade Rosier and husband Chad of Willis, Jami Foster of Conroe, Patricia Mosley and husband Brent of Conroe, step grandchild Monica Martin and husband Scott of Navasota, step grandchild Jason Orlando and spouse Shelby of Navasota, step grandchild Jacob Orlando wife Kristen of Fort Belvoir, VA, step grandchild Kyle and wife Connor of Navasota and many great grandchildren, cousins, nieces, nephews, and extended family and friends. Serving as pallbearers are Terry Joe Roese, Joel Nobles, James Russell “Cutout” Nobles, Mark Symons, Brent Mosley, Timothy “Bubba” Palmer and Colton Mize. Honorary pallbearers are Darren Hinze, Dillon Nobles and Chad Rosier. The family appreciates everyone’s condolences and as Shorty would say, “I’m glad you got to see me.” You are invited to leave kind words and fond memories at www.noblesfuneral.com.

The family of D. R. "Shorty" Nobles created this Life Tributes page to make it easy to share your memories.

Send flowers to the Nobles family.