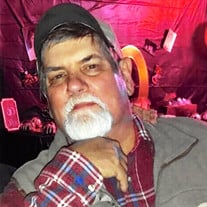 Daniel “Danny” Joe Berger, 61 of Navasota, passed away Friday, October 18th at Brazos Valley Hospice Inpatient Facility in Bryan. A memorial service celebrating his life will be held at 10:00 am, Wednesday, October 23rd at Nobles Funeral Chapel. Visitation with family and friends will begin at 9:00am, one hour prior to the service. Pastor Henry Sanders will officiate. Arrangements are under the direction of Nobles Funeral Chapel. Danny was born Feburary 20, 1958 in Navasota to Katherine Hardwick Berger and Thomas Berger. He graduated from Navasota High School in 1977. He married the love of his life, Marsha Lee Walden on May 18, 1985. Together they had two children, Cody Thomas and Marlee Kay, along with his step son, Trey Meekins. Danny worked at Schult Mobile Homes directly after high school and as a self employed carpenter. He later worked for Interstate/Citation/Ellwood for 30 years until his health declined. Other than his love for his family, fishing and hunting and the outdoors were his passion. His final hunting trip was a very special trip to Nebraska with his son Cody last year. Danny was also a Master Gardner and showed so much pride in his gardening and his 10 acres. Picking and shelling pecans was his favorite past-time. Danny is survived by his wife of 34 years, Marsha Lee Berger; son and daughter-in-law Cody and Kristy Berger; and daughter Marlee Berger, all of Navasota; stepson Trey Meekins and partner Shannon Dwyer of Houston; special uncle/friends Alford and Debra Sue Hardwick of Navasota; sisters and brothers-in-law Glenda and Roger Supak of Caldwell; Denise and Elroy Stolz of Old Washington; Alleen Sledge of Navasota ; father-in-law Tom Walden of Frericksburg; grandchildren Kylee Kay, Jackson Daniel and Kynslee Rae, all of Navasota and Briana and Elloise of Houston; great grandson Jasper of Houston and devoted canine companion, Sharlie. He was preceded in death by his parents, Thomas and Katherine Berger and mother-in-law Betty Lee Walden.

The family of Mr. Daniel "Danny" J. Berger created this Life Tributes page to make it easy to share your memories.

Send flowers to the Berger family.