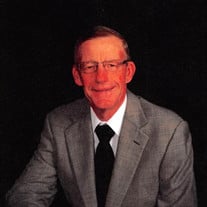 Surrounded by family, Mr. David Luther Barrett, 73, of Navasota went to be with his Lord and Savior Thursday, December 30, 2021 at Seasons Assisted Living in Navasota. Visitation with family and friends will be held from 5:00 – 7:00 pm Thursday, January 6 at Nobles Funeral Chapel. A celebration of life will be at 10:00 am Friday, January 7 at Trinity Lutheran Church in Navasota with interment following at Odd Fellows Cemetery in Anderson. Rev. Mathias Dinger will officiate. Arrangements are under the direction of Nobles Funeral Chapel. David was born the second of four children on September 17, 1948 in Belton to Madison Leroy and Johnnie Merle Barrett. David grew up farming and ranching growing wheat, cotton, and maize. The family also ran livestock. This is where his love of agriculture began. David was active in showing livestock and competing in FFA throughout high school. After graduating high school David spent several years on the family farm before continuing his education at Blinn Jr. College and then Sam Houston State University. David graduated from Sam Houston State University with a degree in Agriculture Education. While at Blinn, David met Brenda Sue Thane. David and Brenda were married on June 3, 1978 at Trinity Lutheran Church. They were blessed with a son, Jeremy Edwin in 1980 and a daughter, Kimberly Renee in 1986. During this time David completed his Masters in Agriculture Mechanization at Sam Houston State and his Mid Level Management at Prairie View A&M. David taught Agriculture in Navasota for 30 years. He was a proud supporter of Grimes County Fair and the Navasota FFA. During fair week every June he could be found helping students getting lambs ready to show. Everybody at the fairgrounds knew David’s old beat up orange toolbox that held some of the best freshly sharpened lamb shears money could buy. David also started the horticulture program at Navasota ISD. The community eagerly awaited his tomato sale fundraiser every year. The last ten years of David’s career he spent working at the farm shop at Wallace Pack Unit for TDCJ. David and Brenda built a stable and loving home for Jeremy and Kimberly where they felt safe and were able to succeed and accomplish all of their dreams. David had his own little piece of paradise in the form of 23 acres that he loved working on. David always had a quick wit and loved picking and aggravating colleagues, students, and his kid’s friends. That is how you always knew he liked you. David was preceded in death by his parents. He leaves behind his loving wife of 43 years, Brenda Barrett; son Jeremy Barrett and wife Ashley of Conroe; daughter Kimberly Tijerina and husband Damien of Navasota; brother Mike Barrett and wife Martha of Bellville; sister Lyndal Cabaniss and husband Dennis of Salado; sister Brenda Meissner and husband James of Bellville; sister in law Bonnie Keenright and husband Terry of Houston and grandchildren Landon and Emmali Tijerina of Navasota; and Paige Barrett of Conroe. He also leaves behind numerous nieces and nephews. Serving as pallbearers are Woodie Land, Ernie Wright, Rick Krolczyk, Ricky Thane, Scott Butler, and Jerrad Meissner. You are invited to leave kind words and fond memories at www.noblesfuneral.com.

Surrounded by family, Mr. David Luther Barrett, 73, of Navasota went to be with his Lord and Savior Thursday, December 30, 2021 at Seasons Assisted Living in Navasota. Visitation with family and friends will be held from 5:00 &#8211; 7:00 pm... View Obituary & Service Information

The family of David Luther Barrett created this Life Tributes page to make it easy to share your memories.

Send flowers to the Barrett family.