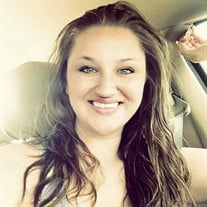 Deaven Marie (Szymanski) Perry, 28 of Virginia Beach, Virginia gained her angel wings on Saturday, September 16th. Visitation with family and friends will be from 5:00 - 7:00pm, Sunday, September 24th at Nobles Funeral Chapel, followed by a parish rosary at 7:00pm. A funeral Mass celebrating her life will be at 10:00am, Monday, September 25th at St. Stanislaus Catholic Church in Anderson and the Rite of Committal will follow in the church cemetery. Rev. Elias Lopez and Rev. Adam McClosky will both serve as co-celebrants. Arrangements are under the direction of Nobles Funeral Chapel. Deaven was born in Bryan, Texas on December 23, 1988 to Timothy Louis and Pamela Ann (Sicinski) Szymanski. She was the second of four children. Deaven attended school in Anderson and after graduation, joined the U. S. Navy. During her enlistment, she met fellow enlisted seaman Henry “Hank” Craig Perry, II. They married in Mechanicsville, Maryland on January 21, 2009 and together had three children. Deaven proudly served her country, but often said being separated from her children while on deployment was the most difficult thing she ever did. She loved her country, but she loved her children more so after two enlistments totaling seven years active duty and several deployments aboard the USS Dwight Eisenhower, she honorably discharged in January, 2015 to spend time with her family and pursue her education in physical therapy at ECPI Virginia. Deaven’s beautiful spirit touched all who knew her. She was strong, intelligent, kind and inspirational. She was an incredible mother to her children and she loved them without limitation. She often dreamed of one day returning to Texas and the family she loved. Deaven loved playing volleyball, drawing and painting and anything outdoors, but her world revolved around her children. She also had a deep love for music and the beach and the tranquility both brought to her soul. Deaven is survived by her husband, Hank Perry, II., of Virginia Beach, Virginia; daughters Gabrielle Allegra Skye Perry and Guliana Amoura Simone Perry; son Gavin Amari Spencer Perry (all of Virginia Beach, VA); mother Pamela Szymanski; sister Rilee Michele Szymanski; brothers and sister-in-law Preston and Amanda Szymanski and Timothy Szymanski and life partner Glen Vigus; maternal grandmother Geneva Sicinski, all of Anderson and numerous aunts, uncles, cousins and friends. Serving as pallbearers are Cody Sicinski, Stephen Kimich, Michael Kimich, Brian Kimich, Justin Schroeder, Lance Schroeder, Jared Schroeder, Joseph Boehnke and Jeremiah Sicinski. Preceding her in death were her father, Timothy Louis Szymanski, maternal grandfather Anton Sicinski, Jr., and paternal grandparents Martin "Jr" and Rosalie Szymanski. You are invited to leave kind words and fond memories at www.noblesfuneral.com.

The family of Deaven Marie Szymanski Perry created this Life Tributes page to make it easy to share your memories.

Send flowers to the Perry family.