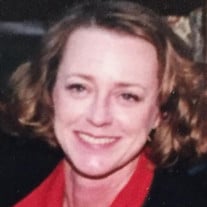 Denise Chapman Gibson, 61, of Dallas, (formerly of Navasota), passed away Wednesday, June 14th, 2017. Visitation will be held at Nobles Funeral Chapel on Sunday, June 18th from 2:00pm – 5:00pm. A Memorial Service will be held at 11:00am Monday, June 19th at First Presbyterian Church of Navasota, 302 Nolan Street, Navasota, Texas. Rev. Barrett Ingram will officiate. Arrangements are under the direction of Nobles Funeral Chapel. Denise was born in Dallas TX on July 19th, 1955 to Lloyd Chapman and Frances Chapman Haigood. Denise received both her Bachelor’s and Master’s Degrees from UT-Permian Basin in 2009 and 2012, respectively. She married James “Jim” Gibson in November of 1979 in Dallas, TX. After relocating to Navasota in the early 1980’s, Jim and Denise had two children, John and Brian Gibson. Together, Jim and Denise helped manage the W.E Gibson Insurance Agency in Navasota, TX over the next several decades. Denise, Jim and their family were active in the First Presbyterian Church throughout their time in Navasota. Denise loved the Lord and serving as much as she could through the First Presbyterian Church. Her many activities included supporting the church nursery, assisting with Sunday School classes and Vacation Bible School camps, participating in mission trips, and helping the family’s faith in God grow and flourish. Additional hobbies and activities enjoyed by Denise include boating on Lake LBJ, cooking new recipes, reading and gaining knowledge about any subject, and showering her grandchildren with gifts. Denise is survived by her brothers David Chapman and wife Cindy, Chris Haigood and Troy Haigood; sons John Gibson and wife Karissa, and Brian Gibson and wife Katie, and four grandchildren, Elizabeth, Ainsley, Noah and James Tucker. She was preceded in death by her parents, Lloyd Chapman and Frances Chapman Haigood, stepfather Ed Haigood, and brothers Danny Chapman and Doug Chapman. In lieu of flowers, the family suggests a memorial donation in her memory be sent to the American Diabetes Association. You are invited to leave kind words and fond memories at www.noblesfuneral.com.

The family of Mrs. Denise Chapman Gibson created this Life Tributes page to make it easy to share your memories.

Send flowers to the Gibson family.