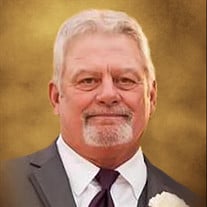 Dennis Lawrence Shive, 65 of Navasota, passed away Tuesday, March 20th at The Med in College Station. Visitation with family and friends will be held from 5:00 – 7:00pm, Thursday, March 22nd at Nobles Funeral Chapel. A celebration of his life will be at held at 10:00am, Friday, March 23rd at Trinity Lutheran Church in Navasota with interment following in Oakland Cemetery. Rev. Matthias Dinger will officiate. Arrangements are under the direction of Nobles Funeral Chapel. Dennis was born February 3, 1953 in Navasota to Wilson and Nelda (Thane) Shive. Known to friends as “Wildwood” and for hunting out of his truck at his deer lease in west Texas, Dennis had a big smile for anyone and everyone. He was happiest with his children and grandchildren, or having friends and family over for barbeque. If his favorite team, the Houston Texans were playing, that made for a perfect day. Dennis was a retired truck driver and a member of Trinity Lutheran Church in Navasota. He is survived by his mother, Nelda Shive of White Hall; sons and daughter-in-law Joshua and Jennifer Shive of Needville and Jason Shive of Navasota; brother and sister-in-law Bill and Tracy Shive of Navasota; grandchildren Jayden and Jetson Shive; nieces and nephews Jeffery and Kara Shive, Jodi and Matt Robinson, Matt and Holly Shive and numerous other relatives and friends. Serving as pallbearers are Phil Sechelski, Danny Kimball, Michael James, Justin Homeyer and Ricky Thane, all of Navasota and Roy Torres of College Station. Dennis was preceded in death by his father, Wilson (Bo) Shive. In lieu of flowers, the family suggests that contributions be made in his memory to Trinity Lutheran Church, 1530 East Washington Avenue, Navasota, TX 77868. You are invited to leave kind words and fond memories at www.noblesfuneral.com.

Dennis Lawrence Shive, 65 of Navasota, passed away Tuesday, March 20th at The Med in College Station. Visitation with family and friends will be held from 5:00 &#8211; 7:00pm, Thursday, March 22nd at Nobles Funeral Chapel. A celebration of... View Obituary & Service Information

The family of Mr. Dennis Lawrence Shive created this Life Tributes page to make it easy to share your memories.

Send flowers to the Shive family.