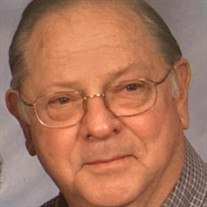 Dr. Dick Butler, 81 of Navasota, passed away Thursday, August 27th at his home. A memorial service celebrating his life will be held at 11:00 am, Saturday, August 29th at First Baptist Church of Navasota with Rev. Clyde Larrabee officiating. Visitation with the family will precede the memorial at 10:00 am. Arrangements are under the direction of Nobles Funeral Chapel. Dick was born January 24, 1939 in Livingston, Texas to Ernest Floyd (Doc) Butler and Marjorie (Tucker) Butler. He lived and went to school in Livington, graduating in 1957. Dick then attended and graduated from Texas A&M University with a biology degree in 1961. He and Darla Gallaway both grew up in Livingston where they were married on June 8, 1962. Together they moved to Houston and completed dental school. In 1965, Dick and Darla made Navasota their home and began their own dental practice. Dr. Butler was an active volunteer in the Navasota community. Dick was a Little League coach, Cub Scout Master, Navasota School Board president and member, member of the Evening Lion’s Club, charter member of the Noon Lion’s Club and a super Rattler Backer. With a servants heart, Dick worked with the youth, sang in the choir, taught Sunday School and was a deacon at First Baptist Church of Navasota. Football, baseball and tennis were a large part of Dick’s life, but he enjoyed playing all games. There have been many rounds of cards, 42 and Chicken Foot at his table. Dick was also pretty good at playing his guitar and enjoyed singing hymns and country songs. Dancing was a favority pastime for Dick and Darla too; they square danced and two-stepped around many dance floors together. Dick was always ready to go somewhere and do something fun. He looked forward to travelling with Darla and his family and friends, especially camping; the Colorado mountains were his favorite. Of all these, Dick most enjoyed just spending time with his family and friends. Dick was a role model to many. He taught others about Jesus and to love the Lord. His legacy will live on for generations and each generation will be united with him when we are all redeemed. He is survived by his wife, Darla Butler, son and daughter-in-law David and Jill Butler; daughters and sons-in-law Dee and Lloyd Halaney and Debbie and Mike Mitchell; sister-in-law Dina Nixon and husband, John; ten grandchildren, Lexi Johnson, Ross and Jessica Mitchell, Cara Mitchell, Collin Mitchell, Faith Johanson, Bethany Butler, Travis Mitchell, Chase Johanson and Brent Butler. He was preceded in death by his parents, E. F. and Marjorie Butler. In lieu of flowers, the family suggests a memorial contribution in his name be made to either First Baptist Church of Navasota or Hospice Brazos Valley. You are invited to leave kind words and fond memories at www.noblesfuneral.com.

Dr. Dick Butler, 81 of Navasota, passed away Thursday, August 27th at his home. A memorial service celebrating his life will be held at 11:00 am, Saturday, August 29th at First Baptist Church of Navasota with Rev. Clyde Larrabee officiating.... View Obituary & Service Information

The family of Dr. Dick Butler created this Life Tributes page to make it easy to share your memories.

Send flowers to the Butler family.