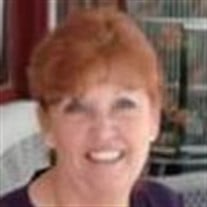 Mrs. Donna McElroy, 76 of Shiro, passed away Tuesday, February 20th at her home. Visitation with family and friends will be held Friday, February 23th from 5:00 – 7:00pm at Nobles Funeral Chapel. Graveside services will be at 10:00am, Saturday, February 24th at Rosewood Memorial Cemetery in Humble, Texas. Rev. Gary Ladd will offiiciate. Arrangements are under the direction of Nobles Funeral Chapel. Mrs. McElroy was born June 24, 1941 in Houston, Texas. She married Jimmy McElroy in Houston on September 20, 1986. She was a beautician and owned and operated a shop in Houston for many years. Upon her retirement, she and her husband purchased a vending business in Houston and enjoyed their time together taking care of it. Many years ago, they purchased an older home in Shiro and began a weekend renovation process that would span several years and many hours working on it together before finally making the permanent move to Shiro. Donna loved the beach, road trips with her husband, fishing, antiquing, working in her yard and cooking. She was happiest when around her children, grandchildren and siblings and she cherished the time spent with them. She was active with the Shiro Volunteer Fire Department and voter registration. She is survived by her husband of 31 years, Jimmy McElroy of Shiro; daughters and sons-in-law Debbie and Mark Smith of Hockley and Chris and Gary Bischoff of Shiro; sons and daughters-in-law David and Sheila Wheeler of Willis and Danny and Ann-Marie McElroy of Shiro; sisters Martha Sutton of Porter, Patty Holland of Tyler, Betty Hudgins of Tabb, Virginia and Delores Hinklin of Big Thicket; brother Jack Wood of Porter; grandchildren John Wheeler, Regina Wheeler, Melissa Reed, Cameron Smith, Erin Hughes, Kristen McElroy, Jenny Ladd, Sara Simmons and Tyler McElroy and great-grandchildren Olivia, Jenson, Reagan, Elaina, Rylan, Trenton, Tyler, Mason, Grant, Peyton, Ella Grace and Robert. Serving as pallbearers are Cameron Smith of Hockley, John Wheeler, Kevin Reed and Rick Brown, all of Willis, Tyler McElroy of Cypress, Robert Simmons of San Antonio, Dillon Hughes opf Navasota and Drew Ladd of Magnolia. Donna was preceded in death by her mother, Gladys Jones. In lieu of flowers, the family suggests that memorials be made in her memory to Wounded Warrior Project at www.support.woundedwarriorproject.org. You are invited to leave kind words and fond memories at www.noblesfuneral.com.

Mrs. Donna McElroy, 76 of Shiro, passed away Tuesday, February 20th at her home. Visitation with family and friends will be held Friday, February 23th from 5:00 &#8211; 7:00pm at Nobles Funeral Chapel. Graveside services will be at 10:00am,... View Obituary & Service Information

The family of Mrs. Donna McElroy created this Life Tributes page to make it easy to share your memories.

Send flowers to the McElroy family.