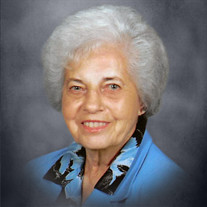 Mrs. Dora Jean Nobles, 87 of Navasota, passed peacefully into eternal life April 12th at her home. Visitation with family and friends will be held from 5:00 - 7:00 pm, Monday, April 16th at Nobles Funeral Chapel. A celebration of her life will be held at 10:00 am, Tuesday, April 17th at First United Methodist Church of Navasota with interment following in Fairview White Hall Cemetery. The Rev. Jeremy Woodley will officiate. Dora Jean was born on August 28, 1930, in Navasota, the daughter of Hollis Douglas & Sophie (Birchfield) Duncan. She married the love of her life, Chester Nobles, on September 30, 1949, and together they raised two sons, Douglas and Marcus. She owned and operated Powder Puff Beauty Salon for over 50 years where she had the opportunity to meet many lifelong friends whom she cherished. Dora Jean was also instrumental in supporting and assisting Chester and Douglas when they worked for Lindley Robertson Funeral Home and later when they opened Nobles Funeral Chapel. Mrs. Nobles loved to travel with Chester and her family and took many trips over the years with her high school girlfriends as well. First United Methodist Church was very dear to her heart, and she was a faithful member all of her life. Grandmama, as she was affectionately called by her family, was the family matriarch and set a beautiful example with her love for Jesus Christ and always putting others before herself. She is best remembered by her family for her delicious cooking, fierce loyalty, and unconditional love. Preceding her in death were her parents; husband, Chester Nobles; sister, Dorothy Duncan; and brother, Bobby Duncan. Left to cherish her memories are her sons and daughters-in-law, Douglas & Jana Nobles of Navasota and Marcus & Bennie Nobles of Deer Park; grandchildren, Jeffrey & Natalie Nobles, Trevor Nobles, J.R. & Tammi Pratt, Cassie & Scott Pullig, and Jennifer & Mitchell NeSmith; great-grandchildren, Lexi, Zoe, & Maddie Nobles, Dillon Schulz, William Pratt, Brandon & Dylan Pullig, and Lane NeSmith. Serving as pallbearers are Douglas Nobles, Jeffrey Nobles, Skip Nobles, J.R. Pratt, Dillon Schulz, William Pratt, and Scott Pullig. The family would like to express their sincere gratitude to Carolyn Kolbasinski, Trevena Rogers, and Sylvia Estrada for the loving and compassionate care they gave to Dora Jean the last few years. For those that desire, memorial contributions may be made to First United Methodist Church, 616 Holland St, Navasota, TX 77868.

Mrs. Dora Jean Nobles, 87 of Navasota, passed peacefully into eternal life April 12th at her home. Visitation with family and friends will be held from 5:00 - 7:00 pm, Monday, April 16th at Nobles Funeral Chapel. A celebration of her life... View Obituary & Service Information

The family of Mrs. Dora Jean Nobles created this Life Tributes page to make it easy to share your memories.

Send flowers to the Nobles family.