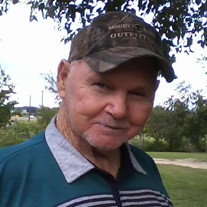 Born October 2, 1924, the seventh child in a family of ten, Dwight Lyman Moody, went home to be with his Lord and Savior Jesus Christ on September 21, 2017 at almost 93 years of age. Dwight was named by his Grandmother Moody, after the famous evangelist, Dwight Lyman Moody. “Uncle Dwight”, as he was known to almost everyone, had the revered position in his family and community as the oldest living Moody in Grimes County. Born and raised in Grimes County, Dwight lived a full and happy life surrounded by “all God’s critters” and four generations of family who loved him dearly. In addition to his 9 siblings and their spouses, Uncle Dwight had over 18 nieces and nephews, 43 great nieces and nephews, 83 great- great nieces and nephews, 3 great-great-great nieces and nephews, plus 25 years of Jack & Jill/Bingham Hill teachers and children he also considered “his own”. “Uncle Dwight” will be forever cherished in the hearts and minds of all who knew him! Uncle Dwight was a man of great faith and character. He came to know Jesus Christ as his personal Savior at the age of seventeen and was baptized during the ministry of the Reverend Howard Shoemaker of the First Baptist Church in Navasota, Texas. Dwight’s life was marked by diligent, dependable work and a legacy of quiet generosities to many. As a youngster, he worked alongside his dad in the wood yard business, delivering firewood to both homes and businesses for fuel. He also had a newspaper and a magazine route, during which time, he saved his money and “learned the value of a nickel”. Later, he also worked in Mr. Dewitt Crawford’s Candy Factory, the Swanson Grocery Company, and Mr. Sol Meier’s Feed Company. In 1953, Dwight and his father, Oscar Moody, built and operated a dairy farm in Piedmont, called The Turkey Creek Dairy Farm. Dwight retired from the dairy and cattle business in 1980, after working with his brother, J.D. Moody, for a number of years. “Uncle Dwight” will be remembered best for his love of music. Throughout his lifetime, he played the guitar, recorded and collected country western and gospel music, and was a lifelong admirer of musicians and their talents. Dwight loved music, history, reading, traveling the countryside, Piedmont, all God’s Creatures great and small, Christmas, the Fourth of July, and FAMILY most of all. He is survived by his sister, Lorraine Moody McLain of Willis, Texas. Dwight was preceded in death by his parents, Oscar Harrison and Pauline O’Brien Moody, and siblings Audrey Moody Binford, Alene Moody Arrington, Willie Irene (Bill) Moody Stolz, Jessie Moody Brown, J.D. Moody, Raymond Moody, Muriel Moody Bingham and Barbara Moody Rhodes. He was also preceded in death by nephews Jimmy Brown, Bob Alex Arrington, Eddie Binford, Scotty Brown, Jeff Moody, and great niece Tracy Binford Wells, and great-great nephews Robert Imhoff and William Lehrmann. In celebration of his life Dwight’s service will be held at the First Baptist Church of Navasota, Texas, with the Reverend Jim Adams officiating. The service will be held Saturday, September 30th at 10:00 AM with interment to follow in the Erwin Cemetery, Piedmont, Texas. A brief visitation/viewing time will be held from 9:00 AM to 10:00 AM preceding the service. Arrangements are under the direction of Nobles Funeral Chapel. The family would like to express special appreciation for their care to the following: Dr. C.H. Prihoda, Shannon Botkin, the nurses and staff at CHI St. Joseph’s hospitals in Bryan and Navasota, The Magnified Nursing Facility in College Station, and Compassionate Care Hospice of the Brazos Valley. In lieu of flowers, please consider a memorial contribution in his name to First Baptist Church, 301 Church Street, Navasota, Texas 77868. You are invited to leave kind words and fond memories at www.noblesfuneral.com.

Born October 2, 1924, the seventh child in a family of ten, Dwight Lyman Moody, went home to be with his Lord and Savior Jesus Christ on September 21, 2017 at almost 93 years of age. Dwight was named by his Grandmother Moody, after the famous... View Obituary & Service Information

The family of Mr. Dwight Lyman Moody created this Life Tributes page to make it easy to share your memories.

Send flowers to the Moody family.