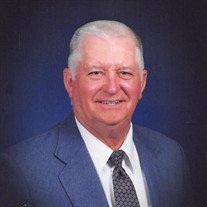 Mr. Earl Henry Musgrove, 84 of Navasota, passed away Tuesday, November 26th at Navasota Nursing & Rehab. Visitation with family and friends will be held Friday, November 29th from 5:00-7:00pm at Nobles Funeral Chapel. Funeral services will be held Saturday, November 30th at 10:00am at Trinity Lutheran Church with the Rev. Matthias Dinger officiating. Interment will follow in Courtney Cemetery. Arrangements are under the direction of Nobles Funeral Chapel. Earl was born in Westfield, Texas on December 31, 1934 to Alvin William and Leona Elizabeth (Mittelstedt) Musgrove. He was baptized on January 20, 1935 in St. Matthews Lutheran Church in Westfield and confirmed in the same church on June 5, 1949. He married Ellen Saathoff on March 5, 1966 in Westfield and together they had five children. Earl worked for his father-in-law at the family dairy and in the hay fields to support his family. He was active in his church community and served on several committees through the years. He enjoyed road trips and loading the kids up and taking a trip to the beach for the day. In 1984 he relocated his family to Navasota, taking a job as a truck driver for Tex-Fab. He worked for them until his retirement. Earl enjoyed the outdoors and retirement allowed him the time to hunt and fish and take his grandchildren along at times, instillling in them the same love and appreciation for nature. A devoted husband, father and grandfather, Earl cherished the time he spent with his family, whether it was giving endless tractor rides to the grandchildren, relaxing with family or listening to his sons sing and play a few tunes. Mr. Musgrove is survived by his loving wife of 53 years, Ellen Musgrove; sons and daughters-in-law Earl, Jr. and Kim Musgrove, Douglas and Zulema Musgrove and Randy and Barbara Musgrove; daughters and son-in-law Lori and Edward Dobijanski and Karen Byers; brothers and sisters-in-law Alvin and Elva Musgrove, Kenneth and Dorothy Musgrove, James Musgrove, David and Ubon Musgrove and Ronnie and Debbie Musgrove; sister Shirley Kaiser; 15 grandchildren and 17 great-grandchildren. Serving as pallbearers are Jayson Hildreth, Kye Hildreth, Colson Hildreth, Chad Perry, Aaron Musgrove, Ryan Perry, Matthew Musgrove, Andrew Musgrove, Douglas Musgrove, Jr., Daniel Musgrove and Travis Musgrove. He was preceded in death by his parents; son-in-law Barry Byers; sister-in-law Christine Musgrove and brother-in-law Gus Kaiser. You are invited to leave kind words and fond memories at www.noblesfuneral.com.

The family of Mr. Earl Henry Musgrove created this Life Tributes page to make it easy to share your memories.

Send flowers to the Musgrove family.