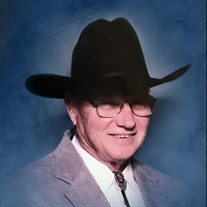 Mr. Earl Edward Sword, Sr., 89 of Iola, went to be with our Lord on Thursday, April 25th at his home surrounded by his loved ones. A memorial service celebrating his life will be held Tuesday evening, April 30th at 6:30pm at Nobles Funeral Chapel. Rev. Jeff Morgan will officiate. Arrangements are under the direction of Nobles Funeral Chapel. Earl was born in Portsmouth, Ohio on March 13, 1930 to Cecil and Myrtle (Deaver) Sword. After high school, he furthered his education by obtaining a Bachelors, then Masters degree in engineering. He enlisted in the U. S. Army, where he proudly served the country he loved for 23 years until his retirement as Master Sargeant in 1970. During his military career, his tours included both Korea and Vietnam and he was stationed in many places such as Alaska and France. One evening in 1963, while stationed at Ft. Sam Houston in Alberquerque, New Mexico, he attended a social event at Sandia Base. His eyes laid upon one beautiful Wanda Wilkinson and his heart was forever captive to her spell. The couple dated and married in Los Lunes, New Mexico on January 10, 1964. Together, they raised five children. Earl worked as a Biomedical Engineer. He was a 32nd degree Master Mason and a past master of Bedias Lodge #651 where he loved teaching and mentoring new Masons. Earl was also a member of the Scottish Rite and the Arabian Temple Legion of Honor. Earl and Wanda enjoyed road trips with no particular destination, trips to Las Vegas, dancing and just spending time together. He enjoyed his vegetable garden and was happiest when their home was overflowing with family , love and laughter. He is survived by his wife of over 56 years, Wanda Sword of Iola; daughters and sons-in-law Samantha and Michael Kimich of Anderson, Sharon and Monte Simmonds of Pearland and Linda and Fred Coker of Branson, Missouri; sons and daughter–in-law Earl Sword, Jr. of Iola and Warren and Brenda Sword of Cleveland; sister Thelma Stephens of Kingwood; grandchildren Madichen Dearing, Micah Dearing, Kylee Kimich, Kaylee Kimich, Mason Sword, Cassandra Young, Emily Dickey, Alex Simmonds, Zachary Simmonds, Lorinda Weinrich, Cassidy Head, Andrew Sword, Brittney Bookman, and Amber Cooper; nephew Raymond Sword, and numerous great-grandchildren, nieces and nephews. Earl was preceded in death by his parents; numerous brothers and sisters, and his devoted canine companion, Angel. You are invited to leave kind words and fond memories at www.noblesfuneral.com.

Mr. Earl Edward Sword, Sr., 89 of Iola, went to be with our Lord on Thursday, April 25th at his home surrounded by his loved ones. A memorial service celebrating his life will be held Tuesday evening, April 30th at 6:30pm at Nobles Funeral... View Obituary & Service Information

The family of Mr. Earl Edward Sword Sr. created this Life Tributes page to make it easy to share your memories.

Send flowers to the Sword family.