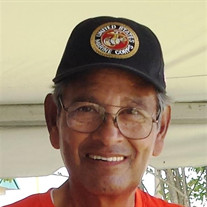 Mr. Earnest V. Zaragoza, 68, of Navasota passed away Saturday, August 13th at his home. Visitation with family and friends will be held from 5:00 - 8:00pm, Tuesday, August 16th at Nobles Funeral Chapel. A celebration of his life will be Wednesday,... View Obituary & Service Information

The family of Mr. Earnest V. Zaragoza created this Life Tributes page to make it easy to share your memories.

Send flowers to the Zaragoza family.