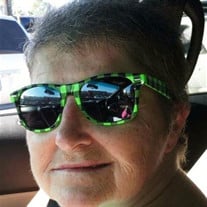 Esther Pullin Jones, 62 of Navasota passed away Friday, October 13th at her home. A memorial service celebrating her life will be held at 1:00pm, Saturday, October 21st at Nobles Funeral Chapel. Julie Bolding will officiate. Arrangements are under the direction of Nobles Funeral Chapel. Esther was born in Houston on June 26, 1955 to James Pullin, Sr., and Nancy Eudora (Everett) Bradshaw. She attended school in Navasota and moved to Lufkin, Texas. She married briefly, a union that produced her only child, Jodi C. Riley. In the 80’s, Esther moved back to the Navasota area and bought a bar, Walter’s Bar and Mixed Drinks, which she owned and operated until selling it in 1997 in order to spend time and care for family members. Known to most as Aunt Esther or Mimi, she had an outgoing personality and enjoyed being around people. Esther was straight-forward and blunt. She sugar coated nothing and could be counted on for a down to earth honest opinion. You didn’t want to ask her thoughts on a matter unless you were fully prepared to hear them! In 2001, Esther went to work abroad for Brown & Root until suffering a debilitating on the job injury resulting in several brain, back and knee surgeries. One of her daughters funniest memories are of them eating at a restaurant during the Rattler Nation State Finals in 2012. Unknowingly, Esther’s electric wheelchair was engaged, and slowly started creeping forward, pushing the table forward and her daughter, Jodi, who was sitting on the other side over backward. She doted on her grandchildren and loved them beyond measure, her heart expanding even more upon the arrival of her great grandchild. She is survived by her daughter, Jodi C. Riley of Navasota; brother Carl H. Pullin, Sr., and wife Rita of Navasota; sister Sandra Jones of Hudson, Texas; half siblings Doris Silcox and husband Mike, Sr., of Richards and Ronnie Kelley of College Station; grandchildren Tyler C. Riley and wife, Megan of Navasota and Colby B. Peavy, also of Navasota; and great-granddaughter Sydney LeighAnne Riley. She was preceded in death by her mother, granddaughter MaCayela, niece Nancy Jones Benoit and sister Julia Attaway. You are invited to leave kind words and fond memories at www.noblesfuneral.com.

The family of Esther Pullin Jones created this Life Tributes page to make it easy to share your memories.

Send flowers to the Jones family.