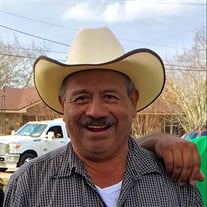 Mr. Felipe Antonio Peralta, 63 of Navasota passed away Thursday, September 21st at his home. Visitation with family and friends will be held Monday, September 25th from 5:00 pm to 7:00 pm at Nobles Funeral Chapel with a parish rosary following at 7:00pm. A funeral Mass celebrating his life will be at 10:00am Tuesday, September 26th at Christ Our Light Catholic Church with the Rite of Committal following in Oakland Cemetery. Rev. Elias Lopez will officiate. Arrangements are under the direction of Nobles Funeral Chapel. Felipe was born May 26, 1954 in Arroyo Seco, Queretaro, Mexico to Diego Peralta and Ernestina Garcia. The oldest of a very large family, he learned hard work responsibility at a very early age. He passed along the value of a strong work ethic to each of his children. He worked hard as a laborer in the manufacturing industry to provide for his family, and was a firm believer in being on time wherever he went, oftentimes an hour earlier than necessary. His motto was, "If you aren't an hour early, then you are late". He loved his family and loved making people laugh. He had a ready smile that would light up the room. He is survived by daughters and sons-in-law Amanda Peralta and Rafhael Orozco and Toni and Daniel Aguilar; sons and daughter-in-law Tino Peralta and Felipe, Jr., and wife Diana; sisters and brothers-in-law Maria de Jesus Peralta, Tomasa and Goyo Perez, Marisela and Javier Montes, Oliva Peralta, Teresa Peralta, Dora and Afat Chaves and Ana Rosa Peralta; brothers and sisters-in-law Nacho Peralta, Domingo and Natividad Peralta and Baldo and Elvia Peralta and grandchildren Alicia, Layla, Jonathan, Rafita and Colton. Serving as pallbearers are Tino Peralta, Domingo Peralta, Baldo Peralta, Daniel Aguilar, Jr., Rafhael Orozco, Rambe Peralta, Sergio Peralta and Libe Peralta. Mr. Peralta was preceded in death by his parents. You are invited to leave kind words and fond memories at www.noblesfuneral.com.

Mr. Felipe Antonio Peralta, 63 of Navasota passed away Thursday, September 21st at his home. Visitation with family and friends will be held Monday, September 25th from 5:00 pm to 7:00 pm at Nobles Funeral Chapel with a parish rosary following... View Obituary & Service Information

The family of Mr. Felipe Antonio Peralta created this Life Tributes page to make it easy to share your memories.

Send flowers to the Peralta family.