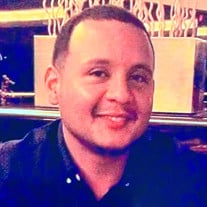 Mr. Felipe Sanchez, III, 35, of Navasota, passed away Friday, July 2, in Navasota. Visitation with family and friends will be Thursday, July 8, from 5:00 -7:00 PM at Nobles Funeral Chapel with a parish rosary following at 7:00 PM. A Funeral Mass will be celebrated Friday, July 9, at 2:00 PM at Christ Our Light Catholic Church with the Rev. Elias Lopez officiating. Rite of committal will follow in Oakland Cemetery. Arrangements are under the direction of Nobles Funeral Chapel. Felipe was born in Fort Myers, FL, to Felipe and Maria (Espinoza) Sanchez on April 9, 1986. He was a devoted father who acknowledged God’s presence in his life. He enjoyed the company of this mother and father and was a firm believer in family values. He was a hard worker who was goal oriented and was looking forward to a bright future with his sons. He will be deeply missed by his family, friends, and everyone who knew him. He is survived by his sons Emmanuel Jacob Sanchez, Phillip Mathew Sanchez, and Leonardo Kadyn Sanchez of Navasota; parents Felipe and Maria Sanchez of Navasota; sister Erika Sanchez of Navasota; grandfather Martin Espinoza of Navasota; and nephews and niece, Deavon Mock, Gisselle Mock, and Jaylynn Mock of Navasota. Felipe was preceded in death by his brother Emmanuel Sanchez and grandparents, Sotera Espinoza and Felipe and Hermelida Sanchez. Serving as pallbearers are Refugio Sanchez, Jr. of Navasota, Ernesto Sanchez of Cypress, Joel Lopez, Jr. of Navasota, Tito Espinoza of Navasota, Tomas Garcia, Jr. of Navasota, Marcos A. Encinas of Navasota, Fernando Encinas of Wharton, and Jesus Rodriguez of Bryan. Honorary pallbearers are Carlos Vasquez, Luis Vasquez, and Rogelio Sanchez, all of Navasota. The family invites you to leave fond memories or kind words at www.noblesfuneral.com.

Mr. Felipe Sanchez, III, 35, of Navasota, passed away Friday, July 2, in Navasota. Visitation with family and friends will be Thursday, July 8, from 5:00 -7:00 PM at Nobles Funeral Chapel with a parish rosary following at 7:00 PM. A Funeral... View Obituary & Service Information

The family of Mr. Felipe Sanchez III created this Life Tributes page to make it easy to share your memories.

Send flowers to the Sanchez family.