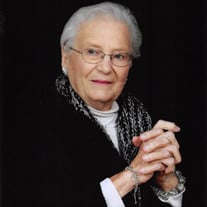 Mrs. Geneva C. (Walkoviak) Sicinski, 90 of Richards, passed away peacefully Thursday, February 27th at her home. Visitation with family and friends will be held from 5:00 – 7:00 pm, Wednesday, March 4th at Nobles Funeral Chapel, followed by a rosary at 7:00 pm. A funeral Mass celebrating her life will be at 10:00 am, Thursday, March 5th at Stanislaus Catholic Church in Anderson with the Rite of Committal following in the church cemetery. Rev. Elias Lopez will officiate. Arrangements are under the direction of Nobles Funeral Chapel. Geneva was born July 11, 1929 in Richards to Stash and Frances (Podraza) Walkoviak. She learned a strong work ethic very early in her childhood, taking care of chores on the farm and assisting with raising her siblings, often completing a full days work before heading to school each morning. A dashing young seaman recently discharged from the U.S. Navy returned home to the neighboring farm and noticed that the little girl next door had grown up. Anton Sicinski wasted no time in taking her as his bride, and the two were married in October, 1948 at St. Stanislaus Catholic Church in Anderson. They began a dairy business and raising a family of eight children. Geneva worked in her vegetable gardens and tended her flower gardens religiously, canning and preserving the harvest throughout the growing season. She enjoyed dancing and cooking for her growing family. She was also active within the church and her community; she taught the first Communion class for over 40 years, was a Eucharistic Minister, Altar Society member, a Catholic Daughter, member of the Holy Name Society as well as serving as a pre-marriage Sponsor Couple. On most days, she could be found working in the large gardens all morning, coming in and cooking a hot lunch for her family and then returning again to the gardens until it was time to start supper and begin getting ready for the coming day. Geneva juggled all of this with what would appear to be very little effort, yet she still made time to visit the sick, attend bridal and baby showers, weddings, funerals or to drop everything to be near a friend or family in need. In 1985, Anton and Geneva sold the dairy business after Anton completed the deaconate process and began to serve as one of two deacons at St. Stanislaus. The family was growing, grandchildren were born and the love in her heart just swelled to make room for them all. She loved her Lord, her church, her family and nature. In spite of the endless hard work involved, her gardens, and her family were a labor of love and brought her immeasurable joy. She is survived by sons and daughters-in-law Anthony and Candace Sicinski and Jeffrey and Sandy Sicinski; daughters and sons-in-law Brenda and George Godfrey, Debby and Ricky Kimich, Tina and Carl Schroeder, Pam Szymanski and Mary Sicinski; sister Kathryn Dawson and sister-in-law Pauline Walkoviak; grandchildren Cody Sicinski, Amy Sicinski, Justin, Holli and Jared Schroeder, Stephen, Michael and Brian Kimich, Stephanie Burzynski, Ashley Andruss, Lance and Lindsey Schroeder, Preston, Tim and Rilee Szymanski, Faith and Grace Sicinski, and Jeremiah and Emily Sicinski; step-grandchildren Kristy Burton and Michael Hutsler; great-grandchildren Colt, Ryder, Elizabeth, Tristan, William, Thomas, Audrey, Joseph, Colton, Wyatt, Kaylee, Kylee, Makayla, Zoey, Lakelynn, Haylee, Hagan, Ollivia, Tristan, Gabby, Gavin, Giuliana, Raelynn, and Paisley and step great-grandchildren Natalie, Chase, Jayden and Juliana. Serving as pallbearers are Cody Sicinski, Justin Schroeder, Jared Schroeder, Steven Kimich, Michael Kimich, Brian Kimich, Lance Schroeder, Preston Szymanski, Tim Vigus and Jeremiah Sicinski. Geneva was preceded in death by her parents; husband Anton G. Sicinski, Jr.; son Daniel Sicinski; granddaughter Deaven Marie Perry; sisters and brothers-in-law Irene Walkoviak, Mary Jo and A. J. Gerland and Agatha and Burt Smith and brothers and sister-in-law Jesse and Dorothy Walkoviak and James Walkoviak. You are invited to leave kind words and fond memories at www.noblesfuneral.com.

The family of Mrs. Geneva Sicinski created this Life Tributes page to make it easy to share your memories.

Send flowers to the Sicinski family.