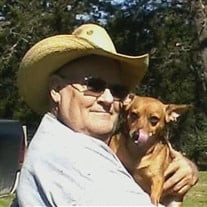 Mr. George “Mike” Michael Montgomery, 72 of Bedias passed away Saturday, October 14, 2017 at his home. Visitation with family and friends will be held from 5:00 – 7:00pm, Tuesday, October 17, 2017 at Nobles Funeral Chapel. A celebration of his life will be held beginning at 1:00pm, Wednesday, October 18th, also at the funeral home. Interment will follow in the Bedias Cemetery. Arrangements are under the direction of Nobles Funeral Chapel. Mike was born on December 22, 1944 in Pasadena, Texas to Seig and Beatrice Montgomery. He joined the U. S. Navy shortly after high school graduation and proudly served his country until his honorable discharge. Mike married Thera Cheek in Deer Park, Texas on March 14, 1970. He worked for Lyondell chemical plant in LaPorte. He retired from Lyondell and they moved to Bedias to property they had purchased in 1971. Even in retirement, Mike was always busy. He worked part-time for Grimes County as the 911 sign man and enjoyed working on his property, raising chickens and tending his large garden, with his faithful canine companion, Tuffy, always at his side. Mike is survived by his wife of 47 years, Thera Montgomery of Bedias; sons Taylor McGowan and wife Vicki of Shenandoah, Texas, Terry “Len” McGowan of Delta, Colorado and Timothy Montgomery and wife Amy of Bedias; sisters and brothers-in-law Mary Baker of Victoria, Nancy and Henry Craddock of Shore Acres and Becky and Bob Moman of Nacogdoches; brother Jeff Montgomery of Mont Belview; grandchildren Jeremy Fiscus, Kristin, Timothy, Jr., Wesley, Colton and Abby Montgomery and April and Heather McGowan; six great-grandchildren and his devoted furbaby, Tuffy. Serving as pallbearers are Randall Nanney, Jr., Donnie Miller, Randy Parker, Rick Tomlinson, Abner Disman, John Dent and Mike Watson. Mr. Montgomery was preceded in death by his parents.

The family of George "Mike" Michael Montgomery created this Life Tributes page to make it easy to share your memories.

Send flowers to the Montgomery family.